The Grand Palace tourist scam typically involves a 'guide', a tuk-tuk and a jewellery storea. It is the best known fraud scheme in Thailand (373,000 Google hits) and has operated for decades. (Screen cap YouTube/Journey and Explore)

Almost 90 people have been rounded up in a joint operation to restore law and order around the Grand Palace following complaints about foreign visitors being pressured to purchase services they do not require.

The blitz, led by the Tourism Police Bureau, was launched with authorities patrolling the areas surrounding the Grand Palace looking for vendors and tuk-tuk and taxi drivers pressing foreign visitors to souvenir shops, tailor shops, or river cruises.

A total of 87 people were arrested in the operation of which 68 were booked for violating traffic regulations and 19 others were charged with creating a nuisance in public areas.

Another group of 52 people were also detained and warned not to engage in fraudulent activities that could tarnish the country's image and possibly hurt the tourism industry. 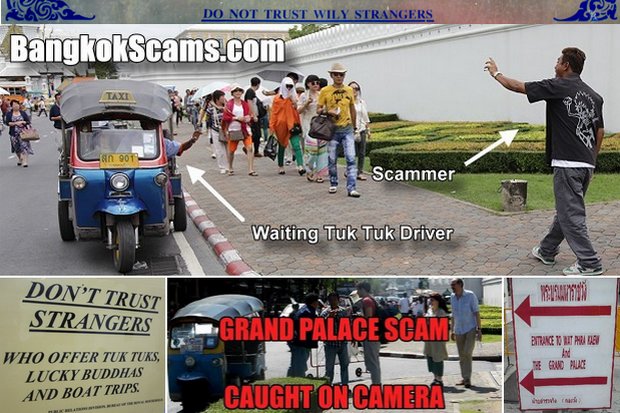 Travellers are warned via dozens of websites and YouTube videos but many still fall for the con game at the Grand Palace.

Scores of tourists at the Grand Palace have complained about gangs preying on them by lying about opening hours of venues and luring them to shop or take river cruises with high commission fees.

According to authorities, some tourists also complained about vendors blocking or grabbing them to buy goods. Some vendors were also accused of selling overpriced and substandard items.

There were also complaints about tuk-tuks and taxis parking in prohibited areas and causing traffic headaches to tourists and pedestrians.

The joint operation is being enforced by the Patrol and Special Operation Division or 191 Patrol, the Traffic Police Division, Chanasongkhram police station, Phraratchawang police station and the City Hall.