A number of pipe bombs and other items are seized after a highway police chase in Narathiwat's Tak Bai district on Thursday. (Photo by Waedao Harai)

A man caught with 41 pipe bombs and pre-set timers in Narathiwat on Thursday has been held responsible for a string of violent attacks, according to the Internal Security Operations Command (Isoc) Region 4’s forward command spokesman.

Sarnusee Yatae, 39, was found to have been involved in the storming of a military outpost on Jan 19, 2011, the attack on the Cho Airong district hospital in 2016 and other violent attacks, said Col Pramote Prom-in, spokesman of the forward command of Isoc Region 4.

The suspect had earlier been convicted for illegal possession of firearms and jailed for four years at the Narathiwat prison. He was released from jail in 2015.

Mr Sanuree was caught and many pipe bombs and other items seized from his pickup truck after a chase by highway police in Tak Bai district around noon on Thursday.  Another suspect, Abdul-arshi Sama, 21, managed to flee. 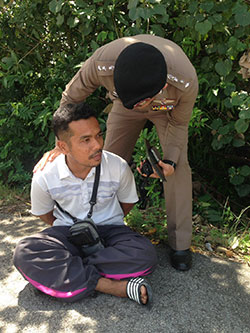 The driver of a pickup truck carrying bombs is arrested. (Photo by Waedao Harai)

Checks found that the pickup truck used to carry the explosives belonged to Usama Yatae, a younger brother of the arrested suspect, said the spokesman.

Mr Usama was earlier arrested for his involvement in the attack on security officers in 2011 and was sentenced to life imprisonment, said the Isoc’s forward command spokesman.

Pol Col Patcharapon Na Nakhon, chief of Tak Bai police, on Friday led a police-military team to search the house of Mr Sarnusee in Rangae and the house of the runaway suspect in Tak Bai district.

During the interrogation, Mr Sarnusee alleged that Mr Abdul-arshi had phoned to ask him to take the explosives from four men at Paluka village in tambon Khosit of Tak Bai district. The fleeing suspect wanted him to deliver the explosives to another man in Yingo district of Narathiwat, said Mr Sarnusee.

Police believed Mr Abdul-arshi might have fled to a neighbouring country.