Police paratroops check their ropes as they survey a shaft in hopes of reaching an area inside Tham Luang cave where the missing 13 might be. (Photo by Patipat Janthong)

CHIANG RAI: Rescuers have discovered a hole that could be an alternative entrance in their quest to find 12 teenagers and their football coach trapped in Tham Luang cave.

Chiang Rai governor Narongsak Osotthanakorn said the chimney, discovered during a survey on the mountain, is located on the Mee cliff in the northern section of the cave.

Police paratroops from the Naresuan camp lowered ropes 40 metres inside and they landed on muddy soil, he added. It is not clear yet whether the area is part of another chamber of Tham Luang.

The chimney is on the opposite side of a location called Pattaya Beach that is believed to be where the boys and their coach might have reached.

The 13 entered the cave on Saturday afternoon and have been the subject of a massive search and rescue effort hampered by flooding and persistent downpours in Mae Sai, near the border with Myanmar in this northern province.

Thai and foreign rescuers have been trying to find other entrances to the cave as the main access route has blocked by floodwater despite efforts to pump it out.

A video clip posted online by the Navy Seal tem showed the rapid flow of water through a passage that divers had been able to navigate erlier, but it was blocked by water again on Friday morning.

Workers are pumping water out of the cave and are bringing in more generators and electrical equipment to facilitate the mission. The water level was rising by three centimetres an hour on Friday morning after heavy rain resumed on Thursday night.

Other teams were drilling into the soil close to the cave in another attempt to drain water from Tham Luang. They sank their first hole 30 metres but did not find any wells, said Ekchawin Longpinit of the Underground Water Department.

"We will continue to drill, and more drilling equipment is being sent" to explore other spots, he sid earlier Friday.

A team of Seals and three British divers attempted to dive to a chamber on the way to Pattaya Beach but returned because of the strong current, according to a Royal Thai Navy report. 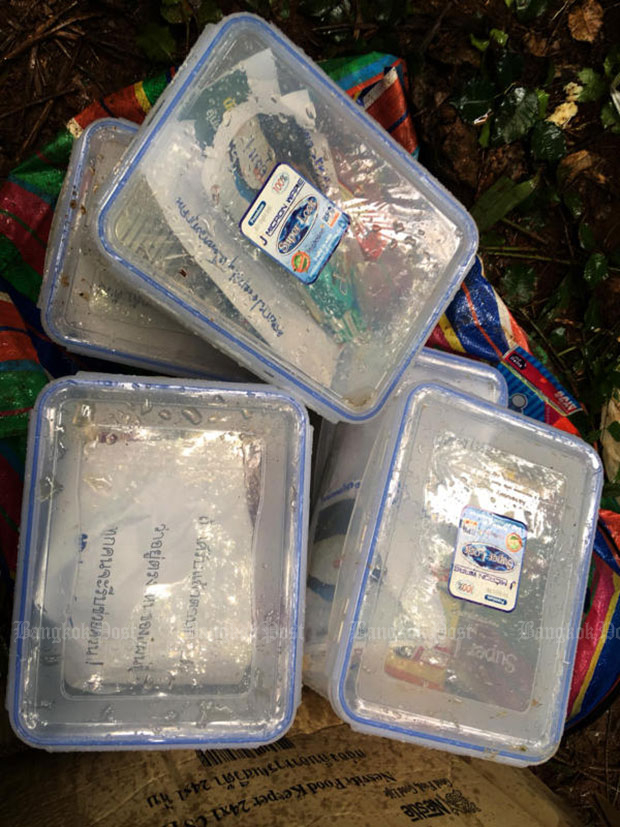 Boxes containing food and first-aid supplies are being randomly dropped into the cave as rescuers hope they could reach the 12 boys and their coach. (Photo by Patipat Janthong)

Police dropped plastic boxes containing food and first-aid packages inside shafts in the hope that they might reach the boys and their coach. Each box includes food, a light, a map with a pen for them to mark their location, a botte of water and even a mobile phone in case connections to contact rescuers can be made.

Police hope that if the pckges reach the group, they could mark their location on the map, place it in a box and float it back to reach the hands of the search teams.