Seal chief vows no turning back on rescue mission

Divers move foward to the third chamber, about half way from the three-kilometre-long from the entrance of Tham Luang cave to a T-junction. (Photo from @ThaiSEAL Facebook page)

As divers move deeper inside Tham Luang, the Navy Seal commander has promised to keep going until they find the boys and their football coach trapped in the flooded cave.

"We won't turn back," said Naval Special Warfare Command chief Apakorn Yukongkaew. "We will continue to move forward until we find the boys."

The teenagers and their trainer have been stranded in the cave in Mae Sai district in Chiang Rai since June 23. Saturday night was their eighth night underground.

Heavy rain and additional flooding have so far prevented rescuers from reaching the so-called Pattaya beach, an area of high ground inside the cave where the 13 may be waiting for help.

On Sunday, Seal and foreign divers planned to penetrate beyond the third chamber on their way to the "beach". The water was not thought to have risen further overnight, although the level deep inside the cave was hard to predict.

The third chamber is roughly halfway along the two-kilometre-long passage that runs from the cave entrance to a T-junction. From there, rescuers will turn left towards the "beach" and dive through flooded chambers, brave strong currents, clamber over muddy soil and climb slippery rocks to get there.

Divers were able to reach the third chamber of Tham Luang cave on Saturday, but were beaten back from the T-junction by rising water levels. (Royal Thai Navy video)

On Saturday, divers were able to reach the third chamber but could move only 200 metres beyond it as the water level rose again, stalling the operation, according to a Seal message posted on their Facebook page.

If conditions permit, divers plan to use the high ground in the third chamber as a temporary operational base -- and then move the base forward to the T-junction.

Additional oxygen tanks, pumps, lights, ropes and survival equipment have been transported into Tham Luang to facilitate the divers' mission and aid the 12 boys and their coach when they are located.

Chiang Rai governor Narongsak Osotthanakorn said on Sunday that no rain fell overnight, and divers were now trying to reach the underground T-junction. He also said teams continued to comb the mountainside looking for fissures that might turn into shafts and serve as a back door to the blocked-off areas where the missing may be sheltering.

"We surveyed all areas and there were reported to be about 20, and out of that there are about 10 with possibility of having shafts," Gov Narongsak Osatanakorn told reporters. "But at the moment, we have narrowed it down to two. Today we're are working inside those two shafts."

Outside Tham Luang, additional pumps were installed and working around the clock, draining water from reservoirs in order to slow the flow of water into the cave and pumping water from the cave itself to in order to reduce water levels further inside.

On Saturday, medical and evacuation drills were conducted near the cave mouth to prepare for the arrival of the young footballers and their coach. 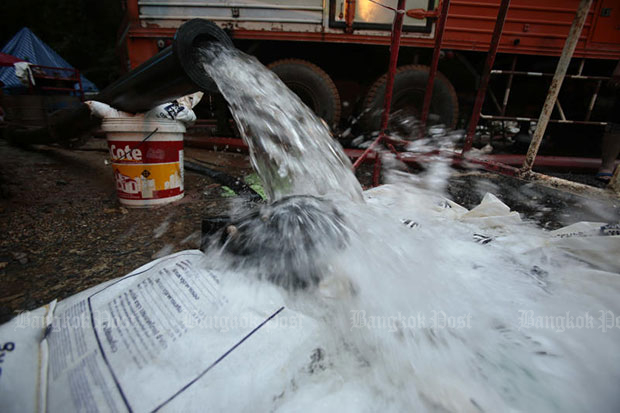 More water is pumped out of Tham Luang cave on Sunday. (Photo by Patipat Janthong)\

MANILA: The Philippines will buy 20 million doses of a Covid-19 vaccine from Moderna Inc, the country's presidential spokesman Harry Roque said on Tuesday.

AYUTTHAYA: Authorities have prepared buildings at two state universities for use as a rehabilitation centre and a field hospital for Covid-19 patients.