Chiang Rai governor Narongsak Osotthanakorn earlier said rescuers had managed to reach the "Sam Yak" three-way junction - and now the most critical section of the murky underground labrynth lies ahead. 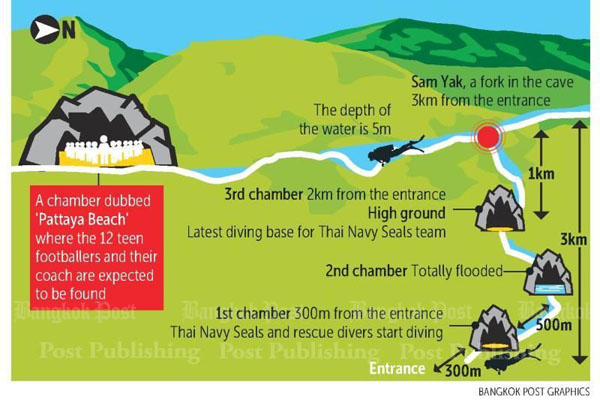 Another long pipe carried by Thai Army & Park Rangers towards the cave complex. Engineers have been pumping water out of the cave all week. They’ve also run electricity and fibre optic cables in to aid the rescue effort. #thamluangcave #thamluang #ถ้ำหลวง #13ชีวิตติดถ้ำ pic.twitter.com/nwoHJU8Wzq

Meanwhile, the navy deployed 20 more "Seal" divers to the site, increasing their numbers to 84.

They were working together with about 230 policemen, 840 soldiers and dozens of rescuers and officials from countries around the globe to locate 12 young footballers aged 11-16 and their 26-year-old coach trapped by floodwaters deep underground.

The boys and their coach entered the cave after their football practice on June 23 -- and the search mission entered its 10th day Monday.

Navy divers establish a forward rescue base in the third chamber of the sprawling Tham Luang cave on Sunday. (Video from Thai Navy SEAL)

Schoolmates of the 12 boys trapped inside a flooded cave in northern Thailand hold vigil for their friends' safe return. https://t.co/9dtk3OTV5T pic.twitter.com/ZDpBc1OuqE