A mother looks at video of her son and other boys of the Under-16 Wild Boar football team, found late Monday at the Tham Luang cave complex in Chiang Rai's Mae Sai district. (Reuters photo)

The chief organiser of the successful search for 12 boys and their football coach said Tuesday that discussions are under way about the best and "totally safe" way to bring them out of the Tham Luang caves.

Chiang Rai province governor Narongsak Osotthanakorn highlighted the next obstacle for teams who had to hack and SCUBA-dive their way into the cavern where the Wild Boar football team were found.

"We won't bring them out until we find a totally safe way", said Mr Narongsak, who is officially in charge of operations at the cave.

Meanwhile, diving experts have taken food and rejuvenative mineral salts so the boys and coach can rebuild their strength after 10 days with almost no food or fresh water.

Mr Narongsak held a media briefing early Tuesday, less than 12 hours after he announced to the country the welcome news that divers had located the team members deep inside the Mae Sai district cave complex.

The amazing moment that British divers found the 12 Thai children and one adult lost in a cave for 10 days. . #Thailand #ThaiCaves pic.twitter.com/hVvYx9K8BP

Thai and British divers found the boys at about 9.45pm Monday some 400 metres beyond the so-called Pattaya Beach area where many thought they might have taken refuge.

That area was actually inundated with floodwaters when the divers reached it, and decided to press on.

Media reported that expert British cavers John Volanthen and Richard Stanton were the divers who first found the missing team in the cave. (continue below) 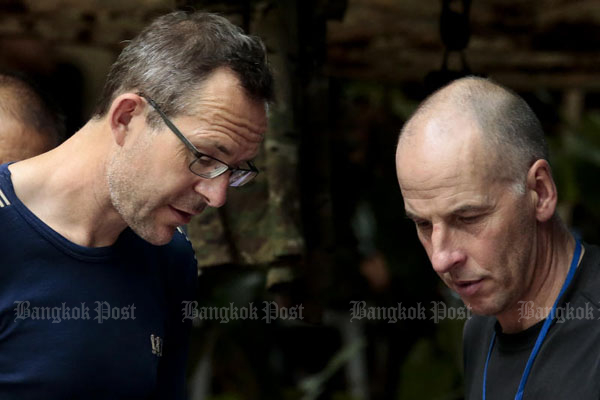 Chiang Rai governor and search coordinator Narongsak Osotthanakorn made the announcement that the entire country was waiting for. (Post Today photo)

All 13 missing people appeared to be in good condition, with no illnesses or injuries, said Mr Narongsak, citing information provided by the Thai Navy Seals maintaining an actual base inside the cave.

Medical teams already have detailed information on each of the 13 people, provided by their families. Doctors had originally stated the boys and their 25-year-old Wild Boar football team coach could survive in the cave for up to a month without food, by drinking the flood water.

More details of the successful search operation are expected when the Seals return to the cave mouth. Possible options to bring the 13 people out of the cave will then be discussed, he said.

Until then, the divers have already provided the boys and coach with PowerGel, electrolyte-laced liquids, and pain killers and antibiotics if needed to sustain their health.

Mr Narongsak thanked the more than 1,000 people - foreign and Thai, in teams and individually - who had worked and helped to coordinate the rescue operation. He had special praise for the Seals, the nickname of the Royal Thai Navy's 144-man elite Demolition Assault Unit.

The team rushed to the cave and led the search for the missing people immediately after hearing about their disappearance.

He said he was grateful to the British, US, Chinese, Australian, Japanese, Lao and Myanmar rescue teams who helped, and even took the lead in some parts of the overall search operation.

"I believe today is the day we are all very glad to know that the 13 people are safe" he said.

"We, more than 1,000 members of the [entire] team - together we made history for Thailand and even the world," he said.

"Cave diving is an incredibly dangerous activity for people who are very experienced doing it, and you're looking at taking people who have no experience." Anmar Mirza, a cave rescue expert, says diving out is the most dangerous option for the soccer team https://t.co/gVBGuZBhYb pic.twitter.com/StWjKHBEAE