Workers extend the duct that supplies air to rescuers inside Tham Luang cave in Chiang Rai's Mae Sai district, as the operation the bring out the 13 footballers continues. (Photo by Patipat Janthong)

CHIANG RAI: Unregistered volunteers negligently pumped water back to underground sources and obstructed rescuers' attempts to drain Tham Luang cave as soon as possible to allow the evacuation of the trapped footballers before water rises.

Tham Luang operation commander Narongsak Osotthanakorn said on Thursday morning that some volunteers who had not been registered to join the rescue mission had arrived and started pumping water back into the ground. Consequently, the water returned to the partially flooded cave.

"They may have some belief that their technique is effective for ground water drainage, but anything that is not in the plan must be discussed with us first," said Mr Narongsak, the former Chiang Rai governor.

"We are concerned about rain. We are racing against water. Water is flowing into the cave although we have plugged its channels."

Mr Narongsak said pumping water out of the cave was the main operation at Tham Luang. Authorities had fully deployed pumps and power lines. Phone lines had not yet reached Noen Nom Sao, the high ground where the trapped boys and their coach were found by divers deep inside the cave complex. A new phone was being taken into the cave after a previous device fell into the water and stopped working.

Rescue supervisors were also concerned about delays in receiving updates of information from the boys. It took 6-7 hours for a diver to make the round trip between the site and the forward command in the third chamber of the cave where rescuers could phone supervisors, who would make decisions at the entrance of the cave.

Another main task on Thursday was to locate a promising opening on the ground surface, up the mountain, above Noen Nom Sao where rescuers could bore a shaft for a possible alternative evacuation, instead of the boys having to dive out.

About 30 teams of rescuers were combing the ground surface above the cave.

Mr Narongsak said rescue teams were estimating the time available before a forced evacuation in the event of more rain and a critical increase in flooding in the cave.

As of Thursday morning, pumps were able to lower the water level in the cave by over one centimetre an hour. The number of flooded passageways where people must dive to get out of the cave remained the same.

Swimming instruction for the boys was continuing.

The 12 boys aged 11-16 and their 25-year-old football coach have been trapped by flooding in Tham Luang cave since June 23. Divers finally found them on Monday night. 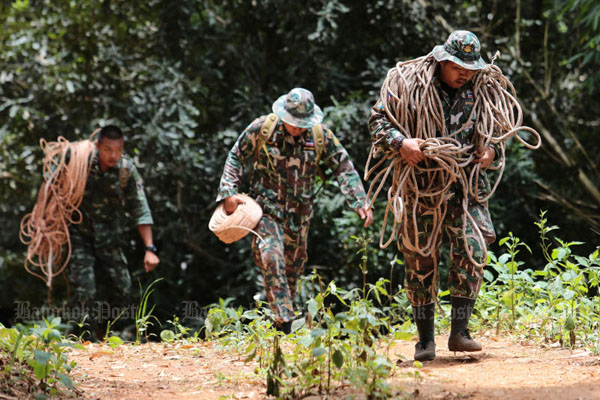 Park rangers carry ropes on their way to look for shafts that may allow the evacuation of 13 young people trapped in Tham Luang cave, in Mae Sai district of Chiang Rai Thursday. (Photo by Wichan Charoenkiatpakul)