Police and national park officials inspect the carcass of an Asiatic black bear after the wild protected animal is hit by a vehicle believed to be a large truck on Highway 304 in Prachin Buri's Na Di district early Thursday morning. (Photo by Manit Sanubboon)

PRACHIN BURI: A male Asiatic black bear was hit and killed by a vehicle, thought to be a large truck, while crossing a road from Thap Lan National Park to its usual habitat in Khao Yai National Park on Thursday.

The bear had severe head injuries. Police did not know what type of vehicle hit the animal, but it was most likely a large truck.

Padon Ngarmlua, chief of Na Di district, said there was no vehicle debris at the scene when he arrived there with the police.

He believed the bear was returning across the road to its lair after foraging for food in Khao Yai National Park when it was hit. There were no lights along the route and the road was narrow there due to construction work.

Checks found some damage to nearby corn and fruit crops on the edge of Thap Lan National Park, Mr Chandit said. The black bear might have fed there and was crossing the road back to Khao Yai National Park when hit by a vehicle.

The carcass was taken to the Khao Yai National Park office for examination before being buried.

Khanchit Srinoppawan, head of the Khao Yai National Park, said he was working with police to track down the driver of the vehicle that hit the protected animal.

He said the government was on the right track in building tunnels and bridges on Highway 304 so wildlife could cross safely. It would greatly reduce the number animals killed and ensure the safety of vehicles using the route.

“A wild gaur was killed by a car while crossing the same Highway 304 from Khao Yai to Thap Lan National Park in 2016,’’ Mr Khanchit said.

The Asiatic black bear is largely a herbivore, and is also known as the moon bear and white-chested bear. 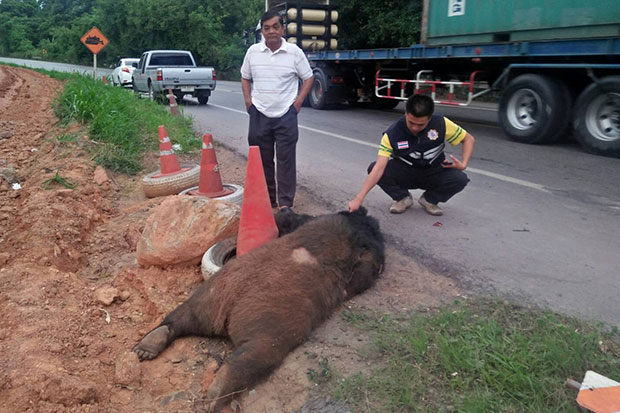 The dead black bear, on the side of Highway 304 in Prachin Buri province, (Photo by Manit Sanabboon) 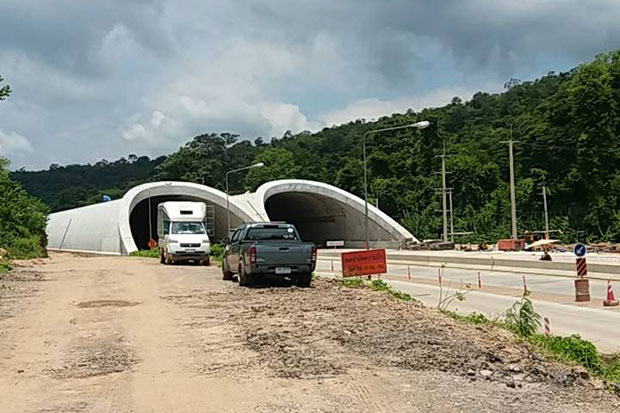 Vehicle tunnels being constructed on Highway 304 will allow wild animals to cross safely above the road. (Photo by Manit Sanabboon)