As many as 20 people may have been trapped inside the sunken Phoenix, the navy says. (Royal Thai Navy photo)

PHUKET: Authorities are opening an investigation and will take action against those found responsible for the capsizing of a boat filled with Chinese tourists, which has resulted in 32 deaths with 23 people still missing

Search teams suspended operations at 6pm on Friday due to poor weather conditions. Divers would resume the search at 5am Saturday for another 23 people still missing, said Prapan Khanprasang, chief of the provincial Disaster Prevention and Mitigation Department office

The death toll jumped after the navy sent divers to enter the wreck of the tour boat Phoenix, which capsized and sank on Thursday evening off Koh Hae in tambon Rawai when it was hit by five-metre waves. It was carrying 105 people, including 93 tourists, 11 crew and one tour guide.

At least 12 of the injured were admitted to Vachira Hospital Phuket.

Phuket governor Norapat Plodthong said divers and rescuers had managed to find 33 missing passengers in the water. However, all but one had died. The survivor sustained injuries and was admitted to hospital.

The Fourth Army has sent a helicopter to aid in the search operation, and CAT Telecom is providing communication channels for Chinese relatives to receive updates. Thai Airways International will arrange for relatives of the victims to travel to the country and immigration procedures will be expedited.

Rear Adm Charoenphon Khumrasee, deputy commander of the Third Naval Area, said it had dispatched 37 divers to search the wreckage of the Phoenix, where at least 20 passengers had been trapped inside.

Another boat also overturned off Phuket in stormy conditions on Thursday afternoon, but all 42 on board were rescued. One fisherman is still missing after being swept from a fishing boat on Thursday off Krabi.

Jin Yilin, consul-general of the Chinese Embassy, said a delegation from the Chinese Foreign Ministry was on the way to Thailand.

Prime Minister Prayut Chan-o-cha expressed his “sympathies and deepest condolences” to the families of the dead. He said the government would “exert all efforts to find those still missing and provide support to all survivors of this tragic event”.

Images on Thursday showed rescued people in large rubber life rafts, with fishing boats and churning seas in the background. The survivors were shown being lifted from the rafts and sitting in life jackets amid ropes on the deck of what appears to be a fishing trawler.

As the seas calmed on Friday, divers were transporting the bodies of the dead, including at least one child, from smaller boats to a larger ship taking part in the search effort.

Mr Norapat said officials would consider whether to ban boats from going to sea during strong winds.

Thursday's storms had forced 12 boats with 263 passengers in all to stay docked at Koh Racha, a popular diving spot about an hour's boat ride from Phuket.

Tourism and Sports Minister Weerasak Kowsurat said initial checks found that most of the Chinese tourists on board the Phoenix were independent travellers who had bought tour packages from online tour agencies. He has assigned his deputy Santi Pawai to go to Phuket to provide assistance to tourists and coordinate follow-up work with other agencies.

Pongpanu Svetarundra, permanent secretary for tourism, said the ministry’s remedy fund would provide compensation to affected tourists in case of deaths, losses of organs, eyesight or and disability. They would be entitled to compensation payments of one million baht each and medical payments of up to 500,000 baht.

Affected tourists would also be entitled to compensation under insurance policies taken out by boat operators and tour firms.

The Phoenix was insured with Bangkok Insurance, said Mr Pongpanu.

The Tourist Police Bureau and the Department of Tourism would investigate to see if tour firms violated any rules that resulted in deaths and injuries, he added.

Panas Theerawanitkul, an executive of Bangkok Insurance, confirmed that T.C. Blue Dream Co, which operated the Phoenix, was insured by his firm.

The firm would provide one million baht in compensation to each victim’s family in case of death and 500,000 baht each to injured victim for medical treatment. Staff would be sent to the hospital where the victims are being treated and compensation would be expedited for all victims, he said. 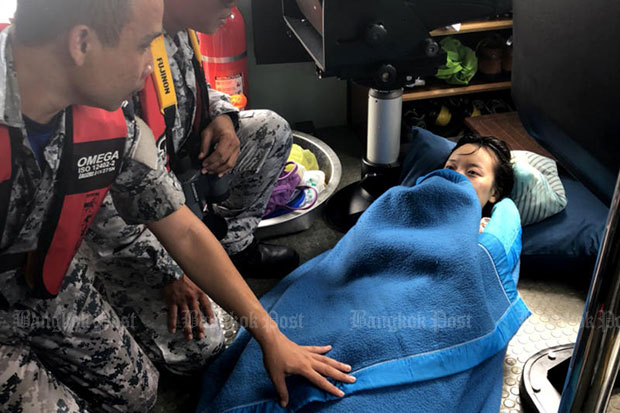 A rescuer tends to one of the Phoenix passengers recovered from the water off Koh Have on Friday.