All in good health, but remain in hospital pending test results

A helicopter takes off from an old airfield known as Wing 416 to transport one of the last five team members who were yesterday extracted from Tham Luang cave in Chiang Rai's Mae Sai district to Chiangrai Prachanukroh Hospital in Muang district. Patipat Janthong

All 12 boys and their 25-year-old football coach were evacuated to safety following an exhausting and perilous 17-day search and rescue operation involving the collaboration of hundreds of Thai officials and elite cave divers from around the world.

The trapped team were found on July 2, deep inside the labyrinthine cave, 10 days after they ventured inside after football practice on June 23 and were stuck there when heavy rains caused it to become flooded.

"The 12th Wild Boar and the coach are now out of the cave," the Thai Navy Seals posted on their Facebook account at 6.48pm on the final day of the mission.

All were taken to a nearby field hospital for initial medical checkups before being transferred to Chiangrai Prachanukroh Hospital in Muang district.

The last four Seal divers to exit the cave included Colonel Pak Loharachun, commander of the medical battalion in Nakhon Ratchasima. They had been inside the cave since the team was found by two British divers.

Shortly after the rescue of the five remaining Wild Boars, operation commander Narongsak Osotthanakorn held a press conference last night to announce the success of the operation. He expressed his gratitude to the global community and the Thai people for their support.

"We'd like to thank the world and the Thai people. We've brought all the five out safely. Their relatives are now going home to take a fresh shower and get to see them at hospital through glass [windows]," he told a press conference at 9.30pm.

Mr Narongsak also said he hoped the 17-day operation to locate and retrieve the 13 football team members would inspire the entire nation to stay united.

"Let these 17 days be remembered and become our lesson. In my opinion, the whole world is the hero," he said.

He said a full press conference would be held late in the evening today during which all possible details of the operation would be shared.

The briefing was filled with applause and laughter, and when asked to give an inspirational quote, deputy commissioner of Police Region 5, Churat Pan-ngao replied: "Where there's a will, here is the way!"

Prime Minister Prayut Chan-o-cha yesterday rejected rumours on social media that the boys had been given anaesthetic to facilitate the operation during their exit journey. "How on earth would they make it out if they were drugged?" he asked.

However, Gen Prayut admitted doctors had given the boys medication to relieve their anxiety.

The prime minister said he visited the eight boys who were rescued earlier at the hospital on Monday evening and all were in good spirits.

Eight boys previously brought out from the cave complex -- four on Sunday and another four on Monday -- were in good condition yesterday morning after some were treated for low body temperatures and suspected lung infections, the Public Health Ministry said yesterday.

Dr Jessada Chokdamrongsuk, permanent secretary for health, told reporters at Chiangrai Prachanukroh Hospital that upon arrival the eight footballers were given a medical examination and received nutrients, vitamins, vaccines and antibiotics.

They were initially all placed on a special diet, despite one asking for fried pork with Thai basil.

The second group of four boys, aged 12-14, also arrived at the hospital with low body temperatures. One was very cold and had an unusually low pulse.

After being treated, all had been restored to good health by yesterday morning, Dr Jessada added.

All the boys were in good psychological condition and were able to talk. However, their white blood cell counts were initially high and doctors were awaiting the results of lab tests, due in a few days, to learn if they had contracted any diseases, he said.

The first four boys have already seen their families through windows while a quarantine period is observed, he said.

"The boys are frequently hungry," he said. "This morning the first four asked for bread and chocolate spread." 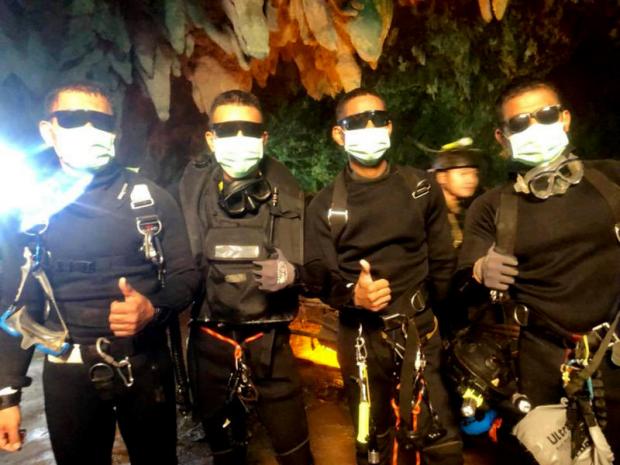 Four Navy Seal divers including Col Pak Loharachun, commander of the medical battalion in Nakhon Ratchasima, pose for a photo last night in front of Tham Luang cave. They were the last to exit the cave after the successful rescue mission. Thai NavySEAl facebook