A spat emerged on Wednesday over the treatment given to space entrepreneur Elon Musk (above, right) that engulfed Prime Minister Prayut Chan-o-cha and rescue coordinator coordinator Narongsak Osotthanakorn.

Prime Minister Prayut Chan-o-cha has urged the media to stop "dramatising" a tweet by American space entrepreneur Elon Musk involving a mini-submarine donated for the rescue of the Wild Boars football team, which some media reported the rescue chief describing as ''not practical.''

"Even though their equipment is technologically sophisticated, it's unfit for our mission," Phayao governor Narongsak Osotthanakorn, who headed the rescue bid, said at a press conference on Tuesday morning before the last of the 12 boys and their football coach were brought out of Tham Luang cave in the evening.

Responding to a tweet by BBC News (World) quoting Mr Narongsak, Mr Musk later tweeted: "The former Thai provincial governor [described inaccurately as "rescue chief"] is not the subject matter expert. That would be Dick Stanton, who co-led the dive rescue team."

Gen Prayut said on Wednesday that Mr Musk showed him the equipment when they met at Chiang Rai airport. He thanked Mr Musk for his help, the premier said.

"His equipment will definitely be useful in several other situations. In Thailand, it may not be able to pass through some narrow passageways.... Stop dramatising," Gen Prayut said.

On Tuesday, the founder and CEO of SpaceX, The Boring Company and Tesla tweeted pictures from Tham Luang cave and wrote, "Just returned from Cave 3. Mini-sub is ready if needed. It is made of rocket parts & named Wild Boar after kids' soccer team. Leaving here in case it may be useful in the future. Thailand is so beautiful."

On Sunday, Mr Musk tweeted, "Got more great feedback from Thailand. Primary path is basically a tiny, kid-size submarine using the liquid oxygen transfer tube of Falcon rocket as hull. Light enough to be carried by 2 divers, small enough to get through narrow gaps. Extremely robust."

He also posted a video clip of the mini-submarine being tested in a pool in Los Angeles on Monday, prior to its delivery.

After Twitter user @MabzMagz asked the tech tycoon on July 4 if he could assist in the rescue in any way, @elonmusk replied, "I suspect that the Thai govt has this under control, but I'm happy to help if there is a way to do so."

"Great news that they made it out safely. Congratulations to an outstanding rescue team!," tweeted the space expert after the Wild Boars were extracted on Tuesday.

Mr Musk visited Tham Luang on the weekend and was taken inside the cave by the rescue team. He ended his Thailand visit by saying he had donated the mini-submarine "in case it may be useful in the future. Thailand is so beautiful."

Great news that they made it out safely. Congratulations to an outstanding rescue team!

Just returned from Cave 3. Mini-sub is ready if needed. It is made of rocket parts & named Wild Boar after kids’ soccer team. Leaving here in case it may be useful in the future. Thailand is so beautiful. pic.twitter.com/EHNh8ydaTT

Mr Narongsak on Wednesday officially announced an end to the rescue operation which he dubbed "Mission Possible" after the 12 boys and their coach were brought out safely from the cave.

"The lessons learnt are not for only Thailand, but for the world. Children will be taught about the dangers and it will also serve as a lesson for agencies," Mr Narongsak said.

He also described former Navy Seal Saman Gunan, who died from a lack of oxygen on July 6 during the rescue mission, as "the real hero".

Mr Narongsak also extended his condolences to Australian doctor Richard Harris who found out his father had died after helping with the rescue mission.

Thanya Nethithammakul, director-general of the Department of National Parks, Wildlife and Plant Conservation, said efforts will be made to restore the ecology of Tham Luang cave and surrounding forest areas, with a budget of 42 million baht, with plans to also develop it into a tourist spot.

Weerasak Kowsurat, the tourism and sports minister, said he would himself see off eight key divers from Britain and Belgium, who were mostly booked to fly back to their home countries Wednesday and Thursday.

He said he would give certificates and gifts as initial offerings to these divers for their contribution.

These divers left their work behind and rushed to Thailand when asked to be on the front line of the rescue mission, he said. 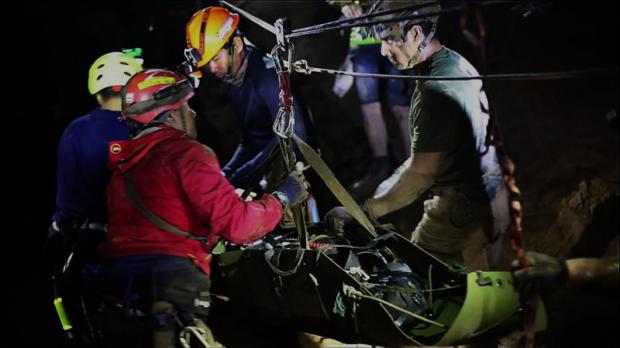 Thai Navy Seals have released a video clip on their Facebook/ThaiSEAL account, dubbed 'The operation the world never forgets', showing how the extraction of the 12 boys and their football coach from Tham Luang cave was successfully achieved. (Photo from the video)

"They [the divers] are going back now after being tired out from the task taking loads of their equipment. We will facilitate their travel back until they reach their destinations," said Mr Weerasak.

One of the divers who went home Wednesday was John Volanthen, one of the two British diving experts who found the trapped boys deep inside the cave on July 2.

The Comptroller General's Department said it will give 495,000 baht to the family of former Navy Seal Saman.

Of the sum, 45,000 baht will be used for his funeral rites and the rest given to his family, said Suttirat Rattanachot, the department's chief.

Mew Suppasit and Gulf Kanawut will celebrate the third anniversary of their first meeting on Wednesday, January 26.