More than 1,000 people, from military experts to cleaners, share credit for a job well done

In their first photos and a video after their rescue, several of the Wild Boars sit up in their Chiang Rai hospital beds. (Photos courtesy PRD)

Behind the successful operation to rescue the trapped Wild Boars football squad from Tham Luang cave in Chiang Rai's Mae Sai district are more than 1,000 people who took part and deserve to share the credit for this historic mission.

Phayao governor Narognsak Osotthanakorn has been commended for his role as chief of the operation.

His decisive leadership skills in directing and coordinating the rescue mission involving Thai rescuers and elite cave divers from around the world have been highly regarded both at home and abroad.

In a recent interview with ABC News, Retired US Navy Seal Vice Adm Robert Harward also praised Mr Narongsak for showing leadership. At the launch of the rescue mission, Mr Narongsak, 53, who formerly served as Chiang Rai governor, declared that any officials who felt daunted by the tough rescue task ahead could go home. "Anyone who cannot make enough sacrifices can go home and stay with their families. You can sign out and leave straight away. I will not report any of you. For those who want to work, you must be ready any second. Just think of them as our own children," he said.

He has since become the focus of media attention and the successful rescue mission has attested to his leadership skills. "He was in the right place and at the right time,'' a source said. Mr Narongsak, he said, is known among his colleagues and subordinates as "Mr Ruler'' for his strict and no-nonsense and scrupulous working style.

During his 15-month stint as Chiang Rai governor, he refused to approve several controversial projects such as a project to build a statue of the elephant of King Mengrai which allegedly encroached on the Kok River and a 50-million-baht project to build "Tung'', the traditional Lanna flag, which used a "special procurement method''.

In particular, he decided to halt some economic stimulus projects which were suspected of irregularites. The projects were under the government's Pracharath people-state partnership scheme. Observers believe the Interior Ministry's shifting of Mr Narongsak to serve as the governor of the smaller province of Phayao might be the result of his opposition to the government's economic stimulus policy and the transfer has caused some public dissatisfaction as it was seen as a demotion.

Military personnel and resources from all branches of the Royal Thai Armed Forces as well as the Royal Thai Police were deployed for the mission in different roles.

On June 24, the day after the boys went missing, local rescuers in Chiang Rai asked for assistance from the Royal Thai Navy at 6pm. Before dawn the following day, the Navy Seals, who came from their base in Sattahip, Chon Buri, arrived at the cave and began planning.

Among the 84 Seals sent to help, the name of army doctor, Lt Col Pak Loharachun apparently crossed the mind of several Navy Seals, who believed he would be only the one in Thailand who could dive and provide basic medical care for the group deep inside the partially flooded cave.

The commander of the 3rd Medical Battalion of Surathampitak Military Camp in Nakhon Ratchasima was then contacted to help in the mission.

Lt Col Pak has undergone tough military training, including as a Seal, Special Operations, and commando.

After the boys and their coach were found on July 2, he went to take care of the group where they were.

After the last four boys and their coach were escorted out of the cave on Tuesday evening, Lt Col Pak emerged along with three other Navy Seals to huge applause from people who waited for them outside the cave. They came out as heroes.

However, the Seals faced sad news on July 6 as former Navy Seal, Saman Gunan, died in the water while resupplying air tanks in the cave complex. His ability, dedication and determination to come and help the group will be well remembered. 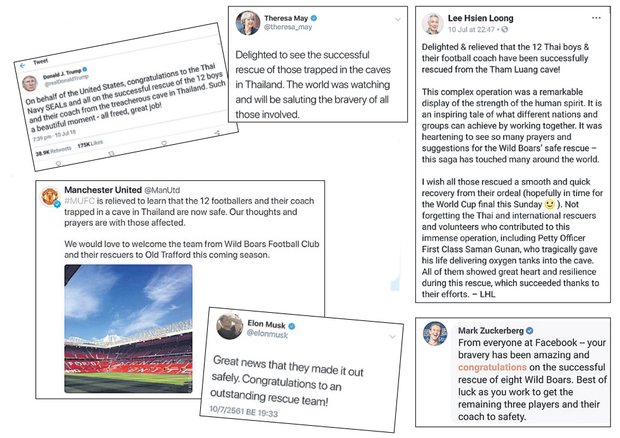 Messages of congratulation and praise have poured in from government leaders, football clubs and business entrepreneurs around the world over the success of the rescue mission.

World renowned and top cave divers travelled to Thailand for the mission to rescue the trapped boys and their coach.

British cave divers John Volanthen and Richard Stanton were the first to find the group in the cave on July 2. However, many British peers and divers from other countries including Belgium, Canada, China, Denmark, Finland and Sweden also took part in this mission.

Australian anaesthetist and experienced cave diver Richard Harris has been praised for the key decisions he made which contributed to the success of the rescue operation to extract the trapped boys.

He accomplished the mission on Tuesday before learning the sad news that his father passed away in his home town of Adelaide Wednesday morning.

Diving to extract those 13 persons trapped in the cave would not be possible had the water current still been high and strong. Apart from the rescue divers, other heroes of the saga include the volunteers who helped drain water from the cave.

The Department of Groundwater Resources reportedly needed to drain 56.6 million litres out of the cave. But the mission was possible because of the help from these volunteers.

Surathin Chaichoompoo, chairman of the Thai Underground Water Association, said he needed to come because ordinary water pumping was too slow to drain out water from the cave in time. Mr Surathin -- known as "Hia Chew" -- introduced underground water draining to the rescue mission.

He manned two water pumps near the cave entrance that helped drain out floodwater from the cave system.

"The only prize I needed was 13 lives extracted out of the cave. This award is priceless," he told the media.

On Tuesday night, before the last person left the cave, an electricity problem caused the pumps to stop.

Water levels rose so quickly that those inside had just five minutes to evacuate safely.

Others involved in the rescue mission at Tham Luang cave were local mountain climbers, including 18 bird nest collectors from Koh Libong Island in Trang province.

Every day during the rescue mission, they would climb down into shafts to find a passage that might bring them closer to the missing team.

Even that team could not find a passage down to the inner cave. Arsarn Khon-kayan, one of the Koh Libong bird nest collectors, told the media that they were proud to join the mission and promised to return next summer.

"We will go back and explore the whole cave. We will then place ropes and provide maps. So next time there will be less commotion if people get trapped in this cave again."

Other supporting teams also include civil officials, staff from state enterprises and the private sector who worked on electricity supplies, facilities, medical services and logistics in the rescue.

Individual volunteers who provided any help that they could have also earned praise, such as the people who provided food, laundry services and cleaning for the rescue teams.

Many farmers have turned down offers of financial compensation for damage caused when water from Tham Luang was diverted to their rice fields and damaged their crops, saying human lives mattered a great deal more than paddy or money.

More than 600,000 cubic metres of water was siphoned from the cave to enable the rescue and evacuation of the 12 trapped boys and their coach.

The water flooded 1,200 rai of paddy rice belonging to 101 farmers. The government is handing out 1,100 baht per rai of flooded fields as compensation to the farmers.

However, many have declined to collect the cheques.

"The money should be used for something else in the public interest. There are people out there who need help more than we do," said one farmer.

When the group was found, Ekkapol Chantawong, the 25-year-old football coach, appeared the frailest.

He has won high praise for his role in helping the children survive their nine-day ordeal without any food.

Rescue mission chief Narongsak Osotthanakorn said Mr Ekkapol taught the boys to drink water dripping from stalactites in the cave, to save their energy by avoiding unnecessary movement, and meditate to cope with anxiety associated with their confinement.

He taught them to take turns using their lamps to conserve them. More importantly, he was the one who sacrificed his snacks and drinking water brought with him so the boys could eat. 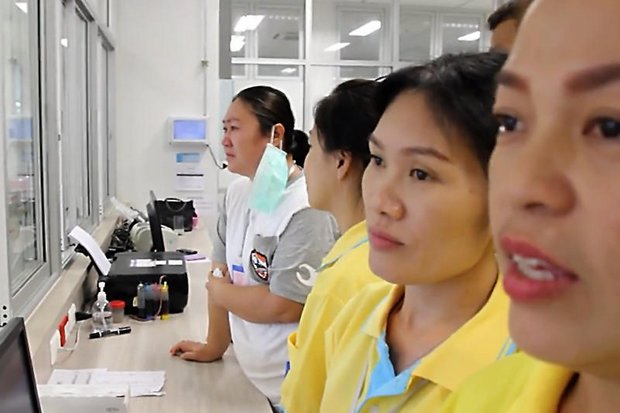 Mums and aunties watch the rescued boys only through windows at the hospital.