No quick path to citizenship for stateless 'Wild Boars'

Any decision to grant citizenship to three stateless members of the football team rescued from Tham Luang cave would be bound strictly by the law, Deputy Prime Minister Prawit Wongsuwon said on Friday.

There are two stateless players in the Moo Pa (Wild Boars) Academy team - Pornchai Kamluang, 16, and Adul Sam-on, 14 - along with their coach 25-year-old Ekaphol Chantawong.

Gen Prawit, also defence minister, refused to comment further on whether it was appropriate to grant them citizenship, saying the matter was under the Interior Ministry.

Arthit Boonyasophat, director-general of the Department of Provincial Administration, said on Friday the department was considering their requests for citizenship, along with relevant documents including  birth certificates.

Officials needed to make thorough background checks on the applicants and their parents as well.

Pol Lt Arthit also asserted that no privileges had been offered to the three. The matter was being handled strictly according to the requirements of the Nationality Act.

Granting of nationality was at the actual discretion of the interior minister, but he authorised provincial and district officials to supervise the issue.

District chiefs had full authorisation to contemplate granting nationality in case of minors aged under 18, while approval came under provincial governors for individuals aged over 18, he said.

The 12 players and coach entered Tham Luang cave in Mae Sai district on June 23 and were trapped inside by rising floodwater. An international rescue operation finally brought them out of the cave, with the first group emerging on Sunday, the second on Monday and the last on Tuesday.

They are now under medical care at Chiangrai Prachanukroh Hospital in Muang district. (continues below) 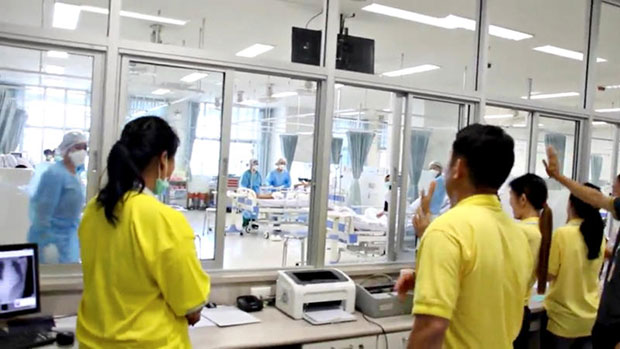 Parents look through glass at their boys at Chiangrai Prachanukroh Hospital on Wednesday, where the young footballers  are recovering well from their long ordeal inTham Luang cave. (Photo: Public Relations Department)

Dr Thongchai Lertwilairatanapong, inspector-general for public health, on Friday said families of the 13 were allowed to visit the patients.

They must wear face masks during the visit and wash their hands before and after entering a convalescent room.

The latest update by the hospital said that of the four young footballers in the first group, the two found to have inflammation of the lungs had recovered.

The four in the second group had no fever and the results of their ear exams were normal.

As for the last group, all five had a mild fever, of some a mild inflammation in their lungs. Three were also being treated for ringing in the ears, caused by otitis media (middle-ear inflammation).

The 13 would not be discharged until doctors were confident of a full recovery. They must still complete a seven-day course of antibiotic treatment.