Lt Col Pak Loharachun, wearing eyeglasses, poses with the Moo Paa football team at Chiangrai Prachanukroh Hospital in Chiang Rai province. The picture is among many pictures he posted on his Facebook page together with a message about the football team who had been trapped in flooded Tham Luang cave, Chiang Rai, for more than two weeks.

The army doctor who stayed with 12 young footballers and their coach trapped in Tham Luang cave, Chiang Rai province, after they had been found praised them for their optimism and good morale, spirits and discipline.

"The qualities of the Moo Paa [Wild Boars] team that impress me are their optimism and great morale in the wake of the ordeal," Lt Col Dr Pak Loharachun, commander of the 3rd Medical Battalion, wrote on his Facebook page Monday.

"Every day, the kids dug a hole into a wall with rock fragments to find a way out. They managed to dig five metres deep although they had nothing to eat."

Dr Pak, who had been chosen to stay with the team due to his medical and diving skills, also wrote that the kids were well disciplined -- they always put garbage in black plastic bags after every meal.

He also praised Coach Ek, Ekkapol Chanthawong, for devoting himself to protecting the young. "I saw from the first day that Ek waited for the boys to satisfy their hunger first. He gave his meal to the young," Dr Pak wrote.

"Coach Ek has a beautiful heart. He is truly dedicated." 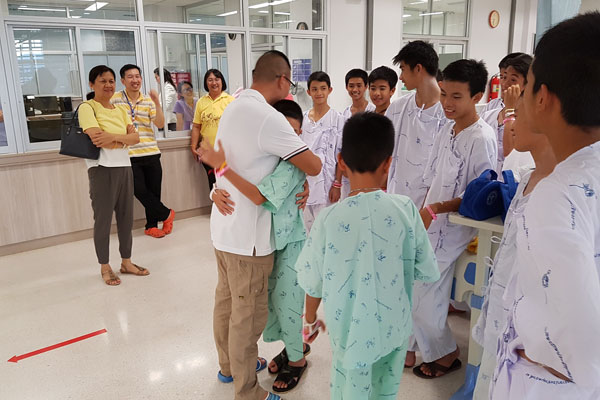 The coach had taken good care of the boys before rescuers met them because the physical and mental health of the boys was much better than expected, Dr Pak wrote.

The coach always told the boys not to take anything from the cave, he added.

"All the boys of the Moo Paa team are aware of all rescuers' dedication to the search for them. And I am confident that the Moo Paa boys will grow to become excellent citizens, contribute to the country and bring good reputation to it in the future," Dr Pak said, recalling the 17-day attempts to save the team.

The army doctor had been with the 13 trapped people since rescuers had found them in Tham Luang cave on July 2. He was the last one to dive out of the cave after the extraction of all trapped people at the Tham Luang-Khun Nam Nang Non Forest Park in Mae Sai district completed.

The 12 boys, aged 11-16, and their 25-year-old coach had visited the cave after their regular football practice on June 23 and been trapped by floodwater. Their extraction started on July 8 and took three days to finish.

The team was expected to be discharged from Chiangrai Prachanukroh Hospital on Thursday. Authorities organised a religious ceremony at Tham Luang to boost spirits and morale and pray for good luck Monday.