A civilian helicopter crashed and burst into flames on a paddy field in Khon Kaen's Chonnabot district on Wednesday morning, killing all on board. (Photo by Chakkrapan Natanri)

KHON KAEN: There was confusion over the number of people killed when a helicopter crashed in Khon Kaen on Wednesday morning, with four people listed on the flight manifest, but only three bodies found at the scene.

Rescuers said three burned bodies were found at the scene.

Khon Kaen airport director Atthaya Lapmark later amended this, saying there were four people listed on the flight and it appeared none survived.

Khon Kaen governor Somsak Jangtrakul said later on Wednesday afternoon an investigation was  underway to find out whether the fourth person was alive or dead.

He confirmed that three bodies had been found at the crash site, even though the list showed there should be four people.

The three bodies would be sent to Chonnabot Hospital for fingerprinting and identification before being sent to the Srinagarind Hospital forensic institute for autopsy, the governor said.

The helicopter picked up some TV Channel 7 crew members from a location in Saraburi and stopped at Saraburi airport for refuelling. It then took off again, heading for Khon Kaen to pick up more TV Channel 7 staff, but crashed in Chonnabot district.

TV Channel 7 reporter Natchapong Muhammad said he was at Khon Kaen airport waiting for the other team members to arrive, as they were scheduled to report on a storm in Roi Et.

“Now, there is no official confirmation who are among the dead.  Authorities are awaiting forensic results. We are looking for the remaining person," he said.

The helicopter, AS355NP, was due to arrive at 9am, the airport director said earlier. Air traffic control lost contact with it over Chonnabot district.

It crashed in tambon Wang Saeng and was engulfed in flames when emergency responders arrived at the scene, Pol Col Keeratikorn Amornpatpakhin, chief of Chonnabot police station, said.

Firemen extinguished the blaze, but by then the helicopter was a destroyed wreck.

“The Department of Airports is sending a team to investigate the crash. It is due to arrive at Khon Kaen airport about 2pm today,’’ the airport director said.

Dark clouds covered the sky over the area and it was raining when the helicopter went down. Airport authorities suspected poor visibility contributed to the crash.

Meanwhile, SFS Aviation Co issued a statement denying early news reports one of its helicopters was involved in the crash. The firm said the reports were inaccurate.

Forensic police at the crash site. (Video by Chakkrapan Natanri) 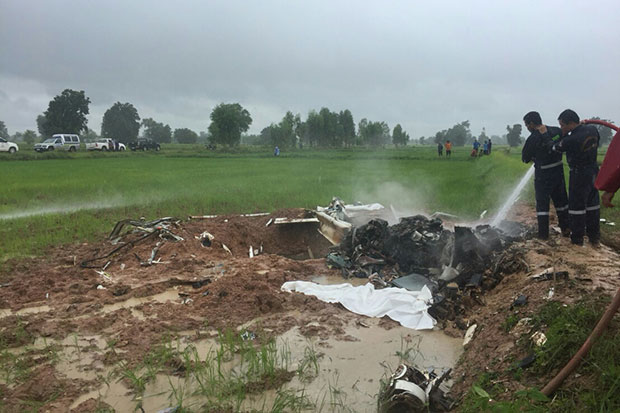 Firemen hose down part of the burned wreckage of the crashed helicoper. (Photo by Chakkrapan Natanri) 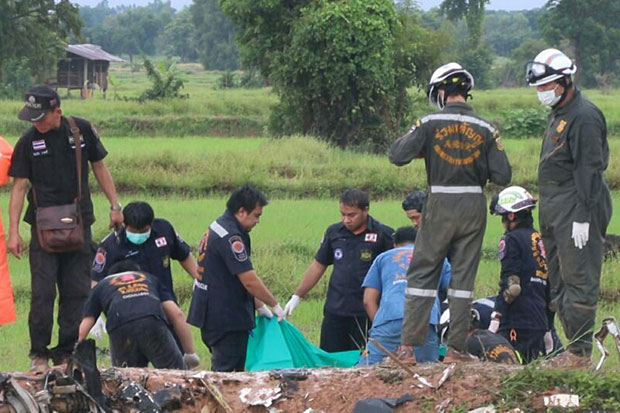 Rescue workers retrieve the dead bodies from the wreckage of the crashed helicopter. 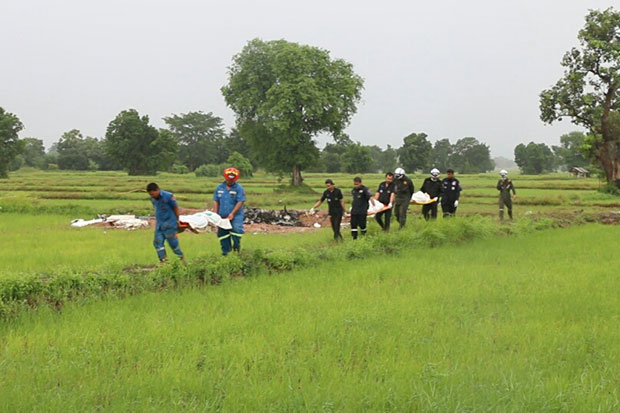 Three bodies are taken from the crash site. (Photo by Chakkrapan Natanri)