Airmen and volunteers load relief supplies provided by His Majesty the King onto a container to be sent to victims of the dam collapse at the Xepian-Xenamnoy hydro-power project. (Photo courtesy Royal Thai Air Force)

Thai military and rescue volunteers are mobilising to help people in Southeast Laos after it was ravaged by flash floods following the collapse of a partly constructed hydropower dam this week.

Prime Minister Prayut Chan-o-cha  handed 5 million baht from the Thai government to flood victims through the Laos embassy in Bangkok while private companies and Thais lving in Laos have donated 1.4 million baht through Laos' Labour Ministry, government spokesman Sansern Kaewkamnerd said, adding the Thai embassy in Vientiane is about to open another account in Thailand to make it more convenient for donors.

Some C-130 aircraft and EC-725 rescue helicopters were being prepared for the mission. The air force's Wing 21, located in Ubon Ratchathani province which border Laos, will also be used as a base of operations, Gen Prawit said. The aircraft will fly to Pakse Airport in Laos to support the rescue mission. 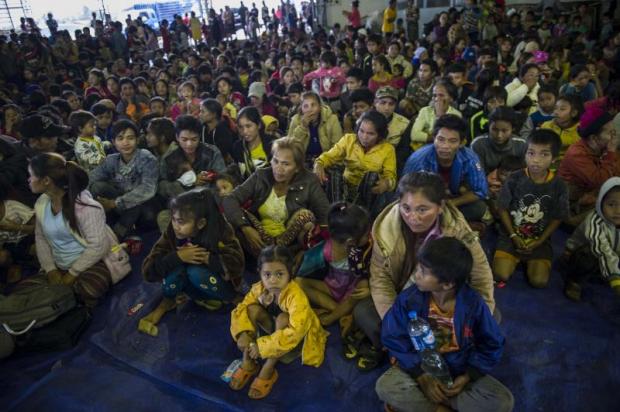 Gen Prayut expressed grave concern about the situation in Laos, according to Col Sirichan Ngathong, deputy army spokeswoman. The 2nd Army Region, which is in charge of Thai-Lao border areas, was also asked to support security forces, vehicles and boats, added Col Sirichan.

"As Thailand is a close neighbour of Laos, we will make every effort to help," he said.

Thai ambassador to Laos Kiattikun Chartprasert said a huge number of Thai people had contacted the embassy to express their will to help by making pledges. He said he would hand the donations over to the Lao Foreign Ministry.

In Khon Kaen villagers, flocked to the Laos consulate-general there to provide necessary items for the flood victims. Kosa School in Muang district is one of a number of public properties that have been set aside as places to receive donated items for the consulate-general. The items will be packed tomorrow and ferried to Attapeu province the following day, said Khemchat Somjaiwong, president of the Khon Kaen Chamber of Commerce, who is helping with the donation campaign.

More than 30 rescue volunteers left Nakhon Ratchasima on Tuesday night and were expected to reach Laos Wednesday. They included volunteers from the HUK 31 Foundation and a diving club in the province. They took with them jet skis, diving equipment, rescue boats and first aid kits. 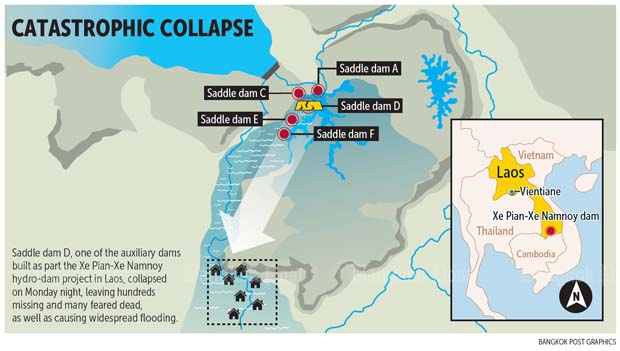 The Supreme Patriarch, has assigned ecclesiastical provincial governors in the eastern region to gather consumer items so they can be delivered to provincial branches of the Office of National Buddhism to assist Lao victims.

He also instructed his attendant to deliver 1 million baht of useful goods to victims, according to his secretary Phra Prom Munee. Energy Minister Siri Jirapongphan ordered the state-run Electricity Generating Authority of Thailand (Egat) to prepare to provide equipment and machinery to assist with with repairing the partially collapsed dam and helping local people.

Ratchaburi Electricity Generating Holding Plc (Ratch), a subsidiary of Egat, is one of the investors in the project. It delivered a letter of condolence  to all those affected by the collapse of the "Saddle dam D" section of the Xe-Pian Xe-Namnoy Hydroelectric Power Project, in the southern Laos provinces of Champasak and Attapue. The company has provided an initial relief fund of 1.3 billion kip (5.13 million baht) to Laos and high-level executives have travelled to the area to support the relief efforts.

In a related development, Thailand's Council of Engineers (COE) will visit the Laos ambassador to Thailand today to offer their professional help.

HANOI: Vietnam is seeking the transfer of mRNA technology to domestically manufacture Covid-19 vaccines, state media reported on Tuesday, as officials warned of supply issues until the end of the year.