Soldiers and rescuers search for people trapped by a mudslide that hit a village in Bo Klue district of Nan on Saturday morning. Eight bodies were recovered, all from one family. (Photo by Rarinthorn Petcharoen)

NAN: Eight people, all from the same family, were killed after a mudslide triggered by heavy downpours struck a village in Bo Klue district on Saturday morning.

The landslide occurred at Ban Huay Khab in tambon Bo Klue Nua at around 7am. Soil loosened by heavy rains rushed down a nearby slope, burying the community in mud up to 10 metres deep in some areas.

Officials from the local disaster prevention and mitigation office and soldiers from the 32nd Ranger Regiment rushed to the village. Col Rattana Pattanasophon, commander of the regiment’s task force, led the search for missing residents as the rain conntinued to fall. The slide resulted in the electricity in the area being cut off.

The searchers quickly found the bodies of seven people — two men, three women and two girls — followed by the discovery of the body of an elderly woman a few hours later.

Preecha Somchai, the chief of Bo Klue district, ordered the evacuation of all residents in the affected village. They were taken to a shelter set up at Sawa School in tambon Dong Phaya of the same district, about five kilometres from the site of the disaster.

Heavy machinery and other equipment was deployed to the area as soldiers and rescue workers raced to dig out soil and clear fallen trees.

Mr Preecha on Saturday evening declared the search operation over, and said authorities would meet to discuss the rehabilitation plan for the area.

Officials remain on full alert as cracks have been found for a distance of 200 metres on the mountain above the community. This raised concern that there might be a new round of mudslides, he said.

Narong Inso, head of the Nan disaster prevention and mitigation office, said more than 200 residents from 61 households had been left homeless from the landslide and all were evacuated. 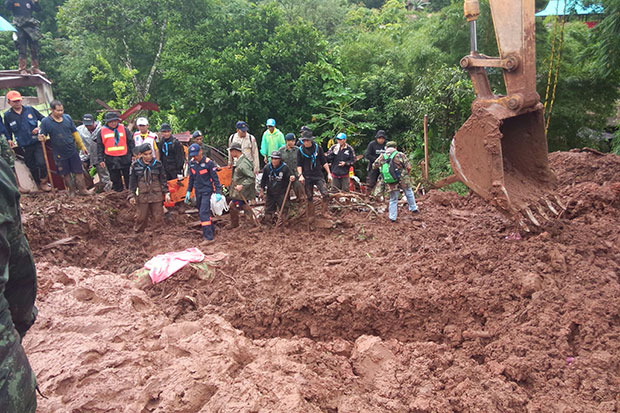 A backhoe is deployed to dig out the mudslide-hit area in Bo Klue district of Nan. (Photo by Rarinthorn Petcharoen) 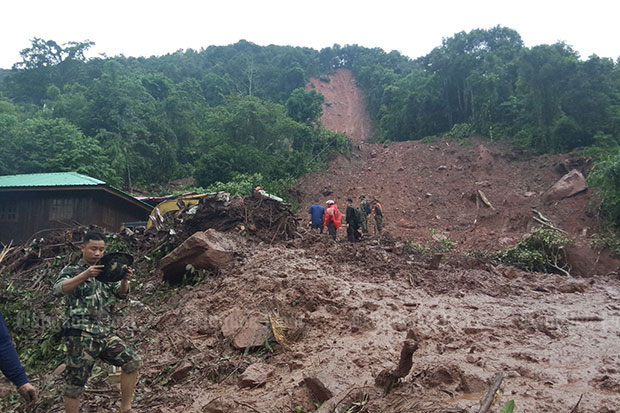