A traveller waits for his documents to be checked in the special lane for holders of Chinese passports at Suvarnabhumi airport on Friday. (Photo taken from @1155TPB Facebook page)

Senior officers from the Immigration Bureau and the Tourist Police Bureau (TPB) led a media crew from China to inspect the special lanes at Suvarnabhumi airport on Friday night.

In addition to special immigration lanes for holders of Chinese passports, authorities are also considering providing multiple-entry visas. This would be more convenient for frequent travellers than the current system requiring a new visa on every trip for a stay of up to 60 days.

Pol Maj Gen Pruettipong Prayoonsiri, commander of the Immigration Police Division 2, said Suvarnahumi airport would have 18 special lanes for Chinese visitors and Don Mueang airport 21 lanes. There will be eight lanes at Chiang Mai airport, 18 at Phuket and 10 at Hat Yai.

Officials with Chinese language proficiency will staff the lanes to serve Chinese visitors, he said.

The tour boat Phoenix capsized in a storm off the resort island on July 5, claiming the lives of 47 Chinese nationals. The craft’s skipper had ignored severe-weather advisories, authorities say.

The tragedy has led many Chinese travellers to think twice about coming to Thailand, putting a dent in the tourism market. The number of Chinese arrivals in July was up just 0.04% year-on-year after a 20% rise in June.

The Tourism and Sports Ministry has revised down its forecast for Chinese arrivals in the last six months of the year by 670,000, to a total of 5.1 million. 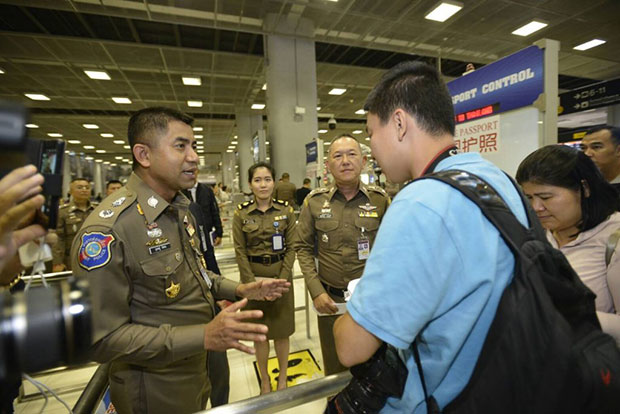