The body of volunteer ranger Phumsak Yenthua, 21, is placed in a helicopter to be transported to his home province of Phatthalung after he was shot dead in Pattani on Saturday morning.

PATTANI: A volunteer ranger was shot dead in an ambush at a roadside pavilion opposite a military outpost in Panare district on Saturday morning.

The attack occurred shortly after Phumsak Yenthua, 21, crossed Highway 42 on the Pattani-Narathiwat route, opposite the ranger outpost where he worked, to the pavilion. 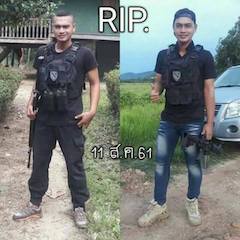 As he was about to turn off the lights in the pavilion, an unknown number of assailants waiting in ambush in a nearby forest fired shots at him, said Pol Lt Tunlakorn Suriywong, a duty officer at Panare police station, who was alerted at around 6.15am.

The sound of gunshots prompted other rangers to rush to the scene, where they found Phumsak seriously wounded. He was rushed to Panare Hospital but died shortly later.

Police found 25 spent M16 cartridges scattered at the scene of the attack and one bullet in the roadside forest, where the assailants had hidden, about 50 metres from the pavilion.

The body of the 21-year-old ranger was taken by helicopter to his home province of Phatthalung on Saturday afternoon.

Authorities were investigating whether the attack was related to the ongoing insurgency in the three southern border provinces.

Around the same time, a suspicious object was found in Thung Yang Daeng district of Pattani. Bomb disposal officers were called in to examine the object, which turned out to be a bomb. It was destroyed.