22-year-old Finn Aarni Otava Saarimaa knew a lot about bitcoin, but he was out-matched by a Thai gang that proceeded to scam millions from him.

Aarni Otava Saarimaa, a 22-year-old Finnish man, may know the tricks of the trade when it comes to cryptocurrencies, but the bitcoin millionaire was caught unaware when a group of Thai people approached him in June last year with a plan to scam a fortune from him.

According to the Crime Suppression Division's (CSD) investigation, the Finnish businessman has lost almost 800 million baht worth of bitcoin to the gang in a fraudulent investment scheme that the CSD has been gathering evidence on for the last six months.

The scam is one of the most challenging cases the CSD has investigated as it involves financial crime in relation to digital assets which are gaining popularity as a tool for exchange and trade.

According to the Anti-Money Laundering Office (Amlo), bitcoin is increasingly being exploited in sophisticated frauds because crypto transactions are difficult to trace until the money is withdrawn.

The CSD learned of the scam in late January this year when they received a complaint from Thai businessman Chonnikan Kaeosali, a business partner of Mr Saarimaa.

According to the complaint, the pair was lured into buying shares in three companies and investing in a casino and new cryptocurrency known as Dragon Coins but had seen no returns at all on the money they put in. 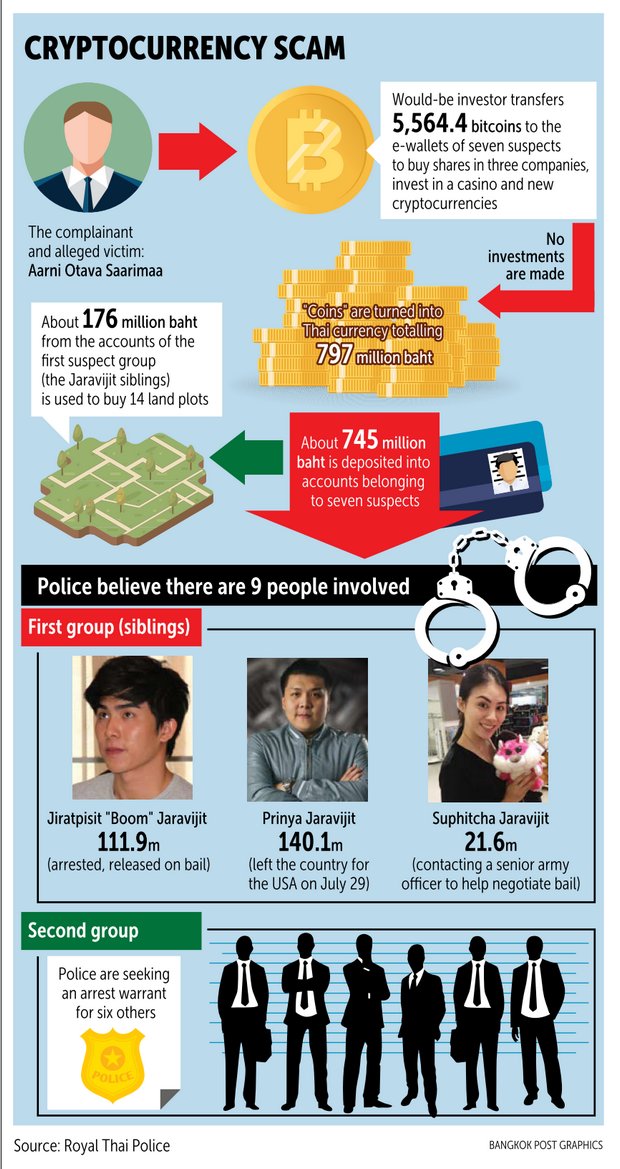 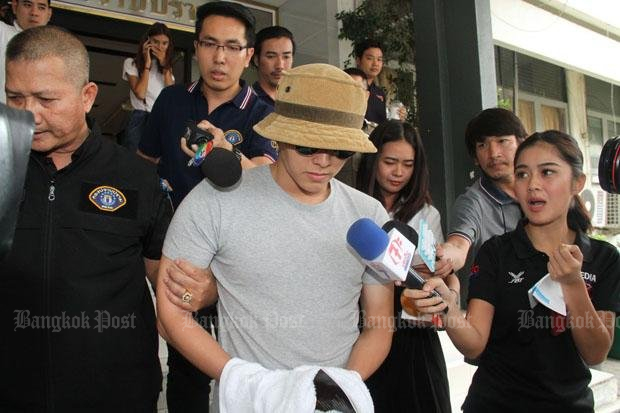 Police took handcuffed 27-year-old soap actor Jiratpisit 'Boom' Jaravijit (centre) from the Crime Suppression Division to the Criminal Court in Bangkok on Friday, the day after his birthday. (Photo by Wassayos Ngamkham)

The CSD investigators, led by deputy commander Pol Col Chakrit Sawasdee, began looking into what turned out to be a typical investment fraud but which was facilitated using bitcoin transactions instead of cash or other assets.

"This case is complicated. We had to carefully examine documents and trace the money trail. We collaborated with Amlo and it took us almost seven months to get approval for the arrest warrants for the first group," Pol Col Chakrit said.

They also talked the victims into believing the Dragon Coins would be used at a casino in Macao, which they took them to visit to add weight to their claim.

After receiving the bitcoin from the victims, the gang sold the cryptocurrency and transferred the money into various bank accounts.

It was not until Aug 8 that the scam came to public attention.

Police arrested actor Jiratpisit "Boom" Jaravijit, 27, at a filming location in Bangkok's Chatuchak district in connection with the scam under an arrest warrant issued by the Criminal Court on July 26 after he was found to have received part of the swindled money.

"For the money laundering charge, we are verifying the amount of money with commercial banks only in the accounts of the siblings and their family and relatives.

The money needs to be frozen and brought back to the victims," Pol Col Chakrit said. "When it is fraud, the complainants and the accused can talk and have arbitration. However, money laundering is a crime that cannot be bargained away."

It is reported that Mr Prinya has fled to the US via South Korea and the CSD is seeking cooperation from the US authorities to track him down.

A source close to the investigation said Mr Prinya is suspected of being the ringleader of the scheme.

He allegedly received tips about the Finn from a Thai banker before setting the scam in motion.

The CSD is gathering evidence to back its request for the court to issue arrest warrants for six other suspects and the warrants are expected to be ready this week, according to a source.

The investigators have found evidence that some of the money was transferred to four of these suspects.

The two others are suspected of colluding in the scam even though they are not initially part of the money trail.

The Jaravijit siblings face charges of money laundering after investigators found they had purchased a number of plots of land recently.

However, they are likely to face fraud charges too, the source said.

He said the CSD and Amlo are working closely with commercial banks to trace and identify any other potential collaborators in the scam.

The CSD deputy chief, however, dismissed reports that a group of politicians were involved in the scam, saying the CSD ran checks and found no irregular activities.

According to Pol Col Chakrit, CSD investigators are also probing whether Prasit Srisuwan, a major investor in the SET market, had any role in the crime although the investor, who met the CSD last week, insists he is a victim too.