Storm Bebinca an ill omen as dams close to bursting

Dams in Kanchanaburi including the Vajiralongkorn dam are close to 90% of capacity and have been ordered to increase their output in order to absorb coming floodwaters. (File Photo)

Two major dams in Kanchanaburi were almost full Thursday evening, especially Vajiralongkorn dam where more than three times as much water is flowing in as is being discharged, according to the director of the office managing it.

The critical water situation was revealed at a time when most parts of the country are preparing to cope with the impact of Tropical Storm Bebinca, which was forecast to bring torrential rain to parts of Thailand for the rest of the week.

He said a sub-committee tasked with making decisions on the dam's water management policy had resolved to adjust the discharge rate of excess water to 43 million cu/m a day, down from 41.42 million cu/m per day, starting Thursday.

The dam now has enough capacity to receive 1.07 billion cu/m more water, he said, adding its structure was in perfect condition as daily checks have shown. 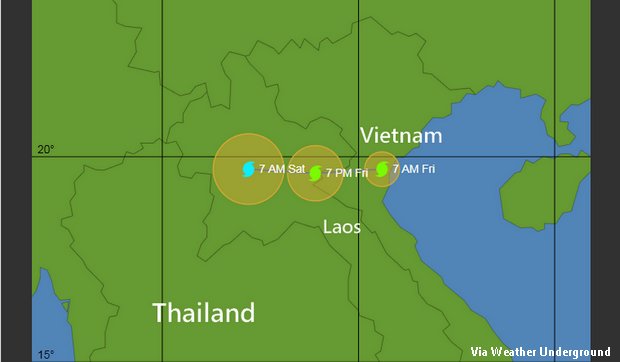 Meanwhile, Srinakarin dam in Si Sawat district was at 87.8% capacity and estimated to be able to receive 2.1 billion cu/m more water, said Prasert Inthap, director of the office managing it.

Water was flowing in at more than twice the rate the excess was being discharged, he said, adding the dam's structure was strong enough to withstand the pressure of higher volume.

Hi-tech equipment was being deployed to ensure its safety as part of the response effort, he said.

Under the circumstances, these two dams are being required to scale up their discharging of excess water for at least the next two months, the source said.

About 2 million cu/m was being discharged daily, almost exactly matching the rate of inflow, said another source.

About 91% of all 177 reservoirs in this province were more than 80% full, highlighting the need to scale up drainage efforts while taking pains to limit the impact on areas that are either flood-prone or already flooded, said the source.

In neighbouring Nakhon Phanom, communities living along the Nam Un and Nam Songkhram rivers have already been hit by water overflowing the rivers' banks and were stockpiling dry grass for cattle.

Tambon Songkhram in Si Songkhram district was hit hard, although no immediate reports of damage were available.

These rivers receive water drained from Nam Un Dam in Sakon Nakhon before flowing out to the Mekong in Tha Uthen district.

The water level there was at 13.60m on Thursday, 1.6m above the critical level.

Residents believe the flooding will be worse than last year, they said.

TOKYO: Tokyo 2020 organisers threw open the doors of the Olympic Village to the media on Sunday, showcasing virus upgrades including a fever clinic just over a month before the Games begin.