Detained Belarussian model Anastasia Vashukevich, better known by her pen name Nastya Rybka, steps out of a prison van on arrival at a court in Pattaya to face trial on August 20, 20118, following a police raid on a sex training course. (AFP photo)

PATTAYA: The Belarusian model who sparked global intrigue after claiming she had evidence of Russian efforts to help Donald Trump win office pleaded not guilty Monday to charges of running an illegal "sex training" class in Pattaya - and said she has turned the evidence over to a Russian tycoon embroiled in the scandal.

Anastasia Vashukevich, better known by her pen name Nastya Rybka, has been detained in Thailand since February when police raided a risque seminar in the seaside resort city of Pattaya. 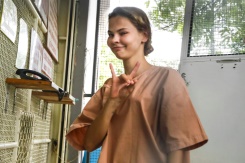 She set off a scramble for details after she promised in an Instagram video to reveal "missing puzzle pieces" on claims the Kremlin aided the US President's 2016 election victory.

No material has been released to substantiate her claims, and critics have accused her of a publicity stunt.

Vashukevich told The Associated Press that she had turned over audio recordings to Russian oligarch Oleg Deripaska, whose conversations about election interference she claimed to have taped.

She has said she provided "escort'' services to Deripaska, who is close to Russian President Vladimir Putin and who has links to Paul Manafort, Trump's former campaign manager now being tried in the United States on money laundering and other charges.

Speaking to an AP reporter in the courtroom in Pattaya, Vashukevich said she had promised Deripaska she would no longer speak on the matter, and that he had already promised her something in return for not making that evidence public.

"He promised me a little something already,'' Vashukevich said. "If he do that then there will be no problem, but if he don't ...'' she said with a shrug and a smile.

She also shrugged and smiled when asked if she had kept her own copies of the information she recorded, which she said comprised "some audio, some video'.'

Asked what the material showed, she said, "You'd have to ask Deripaska.''

Vashukevich and her seven co-defendants arrived at the Pattaya court on Monday for a pre-trial hearing on the charges that include unlawful assembly and conspiracy.

Photos of course participants in detention after the February raid showed them wearing t-shirts that said "sex animator". 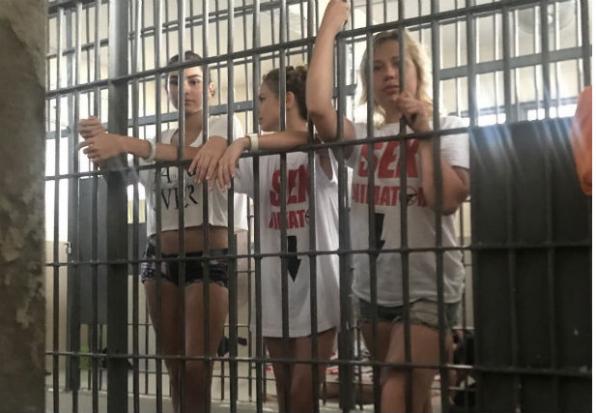 Kirillov, who has served as a spokesperson for the mostly-Russian group because he speaks English, told the court that all eight defendants were pleading not guilty.

"We did not commit any crimes," he said. "What we do is training on how to seduce men and women. We do not make any sexual activity."

Vashukevich cried after the prosecutor showed a photo of several of her co-defendants hugging at a nightclub after a training session.

The next hearing has been set for August 27.

Pattaya, on Thailand's southern coast, is a party town with a reputation for vice and a sizeable Russian expatriate community.

Both Washington and Moscow have publically shrugged off Vashukevich's story, which US State Department spokeswoman Heather Nauert described as "bizarre".

Additional legal troubles are also awaiting Vashukevich and Kirillov back in Russia, where Deripaska won an invasion of privacy lawsuit against the duo last month.

They were ordered to pay $8,000 each to Deripaska, who sued them after a video apparently filmed by Vashukevich surfaced which appeared to show the tycoon vacationing with Sergei Prikhodko, an influential Russian deputy prime minister at the time.

Kremlin-connected Deripaska and Manafort did business together in the mid-2000s, The New York Times reported last year, but their relationship broke down into legal wrangling.

Manafort is awaiting a verdict in his own trial on fraud and tax evasion charges in the US state of Virginia.