CHIANG MAI: A hot-tempered 69-year-old woman has been arrested and charged after ramming her pickup truck into a security guard who had clamped her wheel at Chiang Mai international airport on Monday afternoon.

The incident occurred after Phattra Boonchaliew was hit with a 400 baht parking fine at the airport, according to police called to the scene about 4.30pm on Monday.

Ms Phattra was at the airport to see her friend off, and left her pickup parked in front of the passenger terminal for more than an hour.

When she came out of the terminal, she saw a wheel of her pickup had been clamped. She appeared upset, but went and paid the fine, police said.

She returned to her vehicle and showed the receipt to the security guard who had locked up the wheel,  Vatchara Chaiwong, 27. The wheel was released.

According to police, she then started the engine and accelerated the vehicle into the security guard, who was dragged along the road and severely injured. The pickup also hit four other vehicles before officials and on-lookers forced it to stop 40-50 metres further on.

The incident caused panic among nearby travellers and airport staff.

Piyasak Chaitha, a deputy managing director of M.A.I Inter National Co, the security guard's employer, said on Tuesday that Mr Vatchara's relatives were planning to bring a charge of attempted murder against the driver.

Footage from security cameras showed the pickup truck hitting and dragging the security guard along the road, and running over his body. Mr Vatchara suffered a broken pelvis, broken arms and severe bruising. He remains in the hospital’s intensive care unit, Chiang Mai News Online reported. 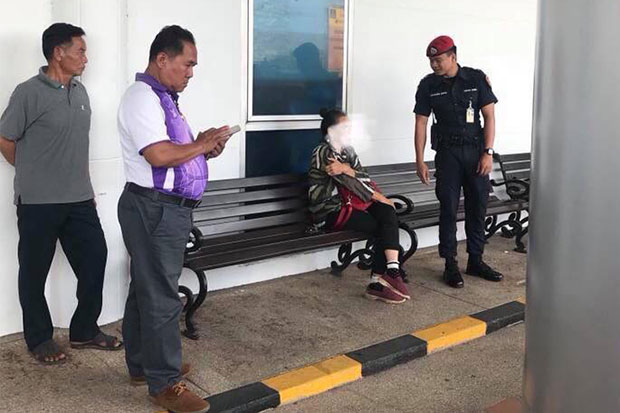