The Department of Land Transport (DLT) is upgrading laws to boost road safety by stepping up fines and imposing lengthy jail terms for driving licence-related offences.

The proposal has received a severe backlash from motorists and netizens. They say the move is unfair and paves the way for authorities to take advantage of motorists. 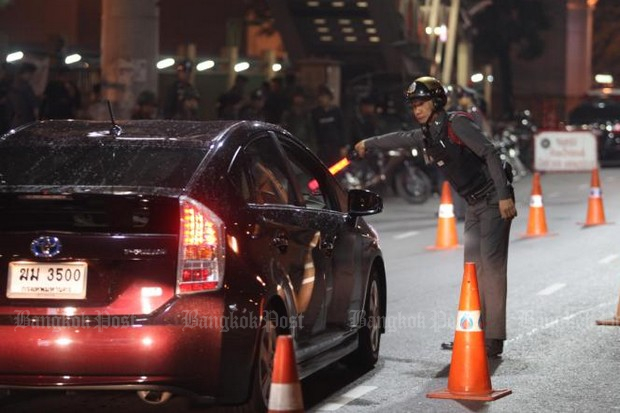 A new traffic law would raise fines for driving without a licence by 5,000 percent - and critics say that's an invitation to police checkpoint corruption. (File photo by Thiti Wannamontha)

DLT director-general Sanith Phromwong confirmed the DLT is pressing on with the enforcement.

"The proposed changes to the new bill have been floated to promote responsible driving, and reduce the road death rate in Thailand," he told the Bangkok Post.

According to a report by the World Health Organisation (WHO) in 2015, Thailand's roads are ranked as the second deadliest in the world. The report found that 83% of traffic deaths in Thailand are suffered by pedestrians, cyclists and motorcyclists -- much higher than the global average of 49%.

Mr Sanit said the proposal, which combines the Vehicle Act and Land Transport Act, has been sent to the cabinet for a decision.

"It is currently up to the judgement of the various committees involved, concerning whether the fines are just or will be exercised to the maximum," he said. "I'm sure they will come up with a fair conclusion for the public."

"The maximum fines we are seeing are the combined result of the two fines of public and private vehicles being meshed together," he said. "It is unlikely that private car-owners will be fined 50,000 baht [for driving without a licence]," he said.

If the proposal is approved, violators could see fines for driving licence-related offences multiply to a maximum of 50,000 baht and three months' imprisonment (or both).

The DLT said current laws are too lax. It said many motorists get behind the wheel while leaving their licences at home. Some are teenagers who have had their licences suspended for drink-driving related offences.

The laws are the Vehicle Act and Land Transport Act, both of which took effect in 1979.

The former applies to privately owned vehicles, with significantly smaller fines. The latter act must be observed by public transport and logistics vehicles, and imposes much higher fines.

Under the Vehicle Act, driving without a licence carries a maximum penalty of 1,000 baht and one month in jail, or both.

Motorists face a maximum fine of 2,000 baht if they drive when their licence has expired, been seized or withdrawn from use.

Under the so-called Land Transport Bill, private vehicles could also be susceptible to higher fines than the maximum penalties for public transport vehicles.

Under the DLT's latest proposal, the maximum fine for driving without a licence would be increased 50-fold to 50,000 baht and the maximum jail term from one to three months.

Driving with an invalid licence or when the licence has been seized or withdrawn by authorities would be hiked to a maximum 50,000 baht from the current 2,000 baht, with the added option of a three-month jail term.

The Land Transport Act says public transport and logistics vehicle drivers face maximum penalties of 40,000 baht and a two-year jail term, according to the DLT. The same maximum jail term and fine is observed with drivers who had their licences seized or terminated.

Mr Sanith said that DLT is also looking to combine the proposed bill with the Land Traffic Act to make enforcement more efficient.

He said police have also proposed a new Land Traffic Bill, which is under review by the National Legislative assembly.

Pol Maj Gen Ekkarak Limsangkat, who sits on a police panel to solve traffic issues, said there was no need for the public to panic as the new penalties were not yet enshrined in law.