Sakchai Suphanthamat nears the end of his long journey from Trang to Doi Inthanon in Chiang Mai, with his dead sweetheart's cremation urn, two dogs and one small black cat. (Photo from @chomthongchiangmai Facebook account)

Sakchai Suphanthamat had promised to take his wife to Doi Inthanon. And he is doing just that, even though she has since died and he has no money.

Mr Sakchai put the urn holding the cremated remains of his sweetheart on a pushcart and set out on his journey from southern Trang in January last year.

Almost 1,500 kilometres to the north, and one year and seven months later, he is close to keeping his promise, along with three faithful companions who joined him along the way - two dogs and a very small cat.

It's not clear where Mr Sakchai, 39, a native of Udon Thani, met his wife, named by Daily News Online as Saifon Singsanan from Khon Kaen. But the two of them made ends meet as day labourers in Nakhon Pathom and then Ratchaburi and Surat Thani, before ending up in Trang.

"I promised her that I would take her to Doi Inthanon and other places across the country if I had the money," he told cm108.com, a news website in Chiang Mai, on Wednesday. (continues below) 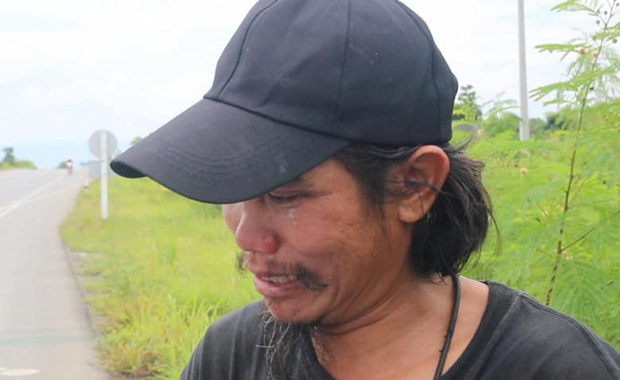 Sakchai Suphanthamat reflects on his journey, on the roadside in Chiang Mai, 19 months after he set out from Trang, determined to take his girlfriend Saifon to Doi Inthanon as he had promised, even though she had since died. (Photo from @chomthongchiangmai Facebook account)

Saifon died in Trang in October 2016 at the age of 41. The cause of her death is unknown.

Broken hearted, he determined to honour his promise to her, regardless. He quit whatever work he had and began his long walk behind a pushcart loaded with a bag holding a few clothes, the urn and his other meagre possessions in January 2017.

Mr Sakchai said he had stayed the night wherever he happened be along the way - be it a roadside shelter, a temple or even a cemetery.

Sometimes he sang Aed Carabao songs as he walked, because they seemed to typify his life.

People learned of his journey and often offered him food, and sometimes shelter, so he would have the strength to fulfill his dream.

As the months past, his three animal companions joined him. First, there was Krachao, a stray dog that took up with him in Samut Prakan. And in Phitsanulok they were joined by, Namo, the second dog.

The man and his dogs kept walking northward, and they found a black kitten dumped on the roadside. And now they were four as he continued his trip to the mountain top of Doi Inthanon.

"They take good care of the cat," he said during the interview with cm108.com. (continues below) 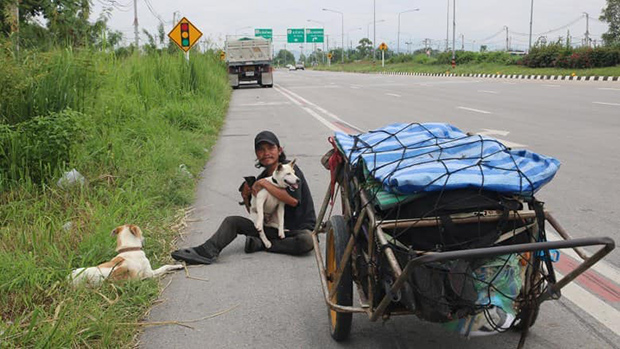 Sakchai Suphanthamat takes time out with his companions - two stray dogs and a cat. (Photo from @chomthongchiangmai Facebook account)

On Thursday, Mr Sakchai walked from Doi Lo district in Chiang Mai into Chom Thong district, almost within sight of his destination.

"Phi Sakchai is walking towards a T-section near the border between Doi Lo and Chom Thong," the Chom Thong district office reported on its Facebook account at 2.50pm.

Chom Thong is the district where a road leads off to Doi Inthanon.

Mr Sakchai said he planned to scatter the ashes of his beloved on the mountain, once he reaches there.

"I don't know how to measure love. For me, I feel my wife remains close to me still," he said, unable to hold back tears.

His long journey to Doi Inthanon is now within reach, with only some 50 kilometres to go.

And he never walks alone. Two dogs, a cat and his wife are with him, even if she cannot walk beside him.