Mandatory Social Security Fund payments, based on salary, will rise as much as 35%, but the Labour Ministry promises that benefits will also go up.

The Labour Ministry has stood firm on its plan to lift the monthly contribution ceiling to the Social Security Fund (SSF) from 750 baht to a maximum of 1,000 baht a month.

The contribution rate will still be the same at 5% of monthly salaries, but the maximum salary used to calculate the 5% individual contribution would be raised from 15,000 baht to 20,000 baht.

Labour Minister Pol Gen Adul Sangsingkeo said Monday that his ministry will continue to work on the proposed hike, while at the same time improving understanding among those affected by the change when it comes into effect later.

"Those who will have to pay a higher monthly contribution to the SSF will need to know what additional benefits they will receive in return," he said.

Despite having insisted that it will proceed with the proposed hike, he said that the ministry will not forward the proposal to the cabinet until all parties concerned agree with the increased ceiling.

Twelve public hearings have been conducted to gauge opinions about the proposed changes to SSF contributions. While most people supported the proposal, some still have questions as to what benefits they may expect in return for putting more money into the SSF every month -- especially those earning more than 15,000 baht a month. 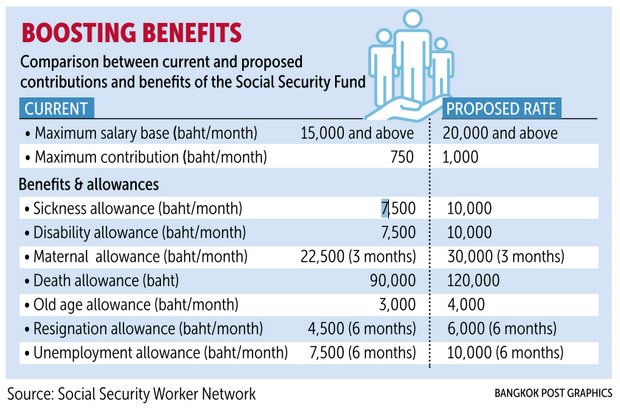 About 81% of the people who attended the hearings agree with the proposed change, said Suradej Waleeittikul, secretary-general of Social Security Office (SSO) said previously.

The proposed hikes to the SSF monthly contribution will only affect those people earning 16,000 baht or more per month, he said.

As they will have to contribute more to the SSF, they will receive more benefits when compared to people who contribute less money into the fund, Mr Suradej said.

Compensation payments for workers taking unpaid sick leave will also be raised to a maximum of 10,000 baht per month. Currently, the payout is calculated at 50% of actual daily wages -- not exceeding 15,000 baht.

Manas Kosol, president of the network of workers insured under the social security system, has previously admitted that there are people who agree with the proposed changes to SSF contribution, and those who disagree with the planned hikes.

"However, the proposal appeared to have won more support than objections," he said, referring to the past 12 public hearings on the proposal.

Although the proposed change to the SSF contributions will mean higher benefits for those who pay more, it will not really benefit those insured under the social security system in encouraging savings for retirement, he said.

The reason is because the contribution rate will still be the same, he said.

About 15 million Thai and foreign workers are insured under the current social security system.

There are approximately 22 million workers not covered by the social security system, including freelancers and self-employed workers, said Pol Gen Adul.

Out of the 22 million workers not covered by the social security system, only 2.5 million workers have applied to be included in the current system as sanctioned under Section 40 of the Social Security Act, Pol Gen Adul said.

This year, the social security system has so far seen only about 300,000 new members, said Pol Gen Adul, before adding that between 2 and 3 million new members are expected to sign up next year.

In 2017, SSF earned 5.8 billion baht from returns on its investment, which reflects transparency and efficiency in the management of the fund, Mr Manas said.