Despite the many high-profile international campaigns that tout the welcoming people, exotic food and attractions of the Land of Smiles, Thailand is not the top choice for expats in Southeast Asia, according to a new survey. 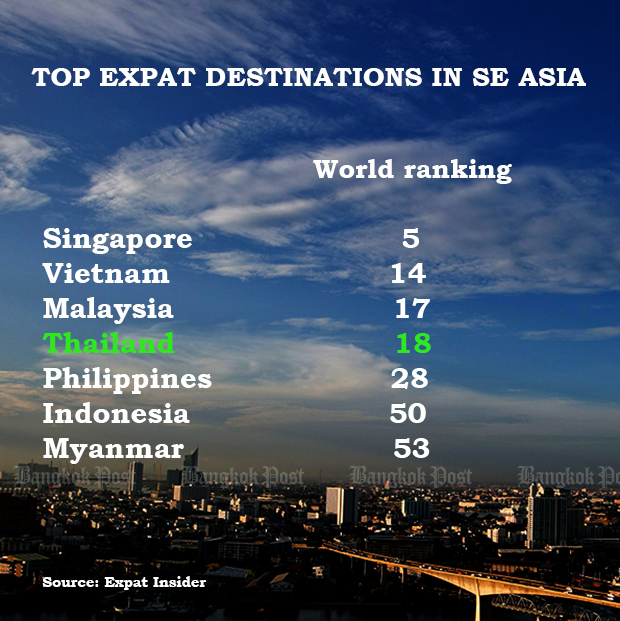 The country is not even second or third among the seven Asean nations that were ranked by Expat Insider. It placed fourth after Singapore, Vietnam and Malaysia in this year's survey released on Friday.

The Philippines, Indonesia and Myanmar were ranked below Thailand. The positions remained unchanged from last year. Cambodia, Laos and Brunei were not on the list.

Expat Insider based its conclusions on responses from 18,135 expatriates of 178 nationalities living in 187 countries or territories in the online survey conducted from Feb 15 to March 7. They were asked to rate the country where they were residing on 48 factors from quality of life to financial facilities. All were factored into the calculation of the rankings.

The survey did not detail how Thailand fared in all categories, but the country did not rank in the top 15 in categories such as Quality of Life and Family Life. However, it ranked fourth worldwide in attractive cost of living.

Bahrain came first overall for the second year in a row, while India was last in 66th place, according to the report.

Panama (13th), Ecuador (3rd) and Australia (12th) were among the countries that made the biggest gains in the rankings, while Sweden (46th), Romania (37th) and Hong Kong (56th) saw the sharpest drops.