MRTA closes in on 2 rail plans

The cabinet approved a royal decree yesterday that would appoint the Mass Rapid Transit Authority of Thailand (MRTA) to oversee the construction of urban mass-transit projects in Chiang Mai, Phangnga and Phuket. 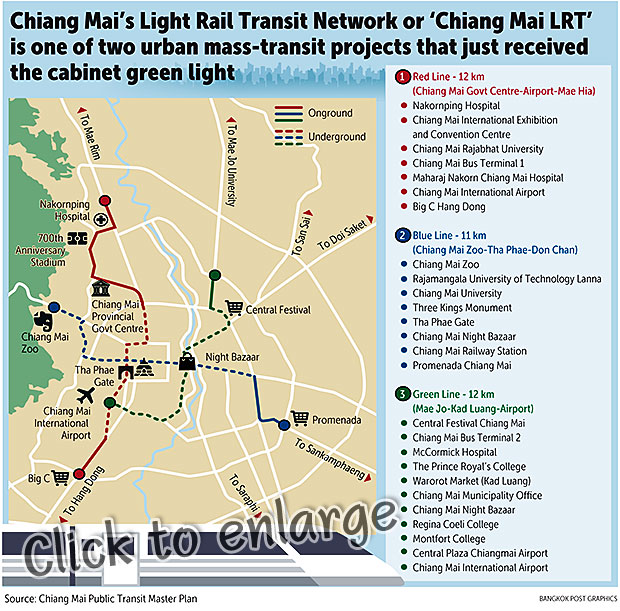 It got the green light at a weekly cabinet meeting headed by Prime Minister Prayut Chan-o-cha.

The decree is seen as vital because the MRTA is a state agency with considerable expertise that can assign tasks to oversee construction and the operating of urban mass-transit rail systems, according to government spokesman Sansern Kaewkamnerd.

The MRTA has hitherto overseen electric train networks in Bangkok and its metropolitan area.

The cabinet's endorsement was perceived as a guarantee that much-anticipated urban trains in Chiang Mai and Phuket will be brought into operation.

First up is the Phuket-Phangnga light rail network, with Chiang Mai's s light railway network also hovering in the pipeline. Both have been proposed by the Office of Transport and Traffic Policy and Planning (OTP) for years. This year the cabinet has approved both in principle with bidding set for around 2020.

According to the OTP studies, both projects must use the so-called "Light Rail Transit" (LRT) system, or lightweight trains that run at relatively slow speed. The LRT system in Chiang Mai would be built underground in downtown and historic zones.

The Phuket-Phangnga line would stretch from Takua Thung district in Phangnga to Chalong intersection in Phuket, running for a total of 60 kilometres.

If completed, the route would be the first electric train line in the southern region, with 24 stations at a total cost of nearly 40 billion baht.

The project is likely to be divided into two phases. The first 40km phase would start from Phuket International Airport and continue to Chalong intersection in Phuket, and take three years to build. The MRTA and OTP are studying the second phase.

The Phuket-Phangnha route could cater to up to 70,000 passengers a day. It would pass by 40 schools and several commercial districts in two provinces. Tickets are expected to range from 15-25 baht.

The MRTA is fine-tuning the investment plan for this project. By early next year, the investment proposal should be finished and forwarded to the Ministry of Transport for approval, according to MRTA governor Pakapong Sirikantaramas.

Another project on the list is Chiang Mai's Light Rail Transit Network. The project comprises three routes totaling 35km in length and is expected to cost 86 billion baht.

To avoid causing traffic congestion, the MRTA has reportedly decided not to build the three routes at the same time.

Bidding is also set to commence in 2020, while construction for all three routes is likely to take six years.

The first line, dubbed the Red Line, has been envisaged as a 12km route running from north to south that encompasses the western side of the city.

Boonlert Buranupakorn, president of the Chiang Mai Provincial Administrative Organisation (PAO), said earlier that this is "the most promising" effort he has seen from the government so far in terms of setting up an electric train line in the province.

He said the PAO would operate the whole network, adding a public-private company would be formed to oversee the operations of all routes as the project is likely to incur losses for a decade.

Both LRT networks in Phuket and Phangnga and Chiang Mai have been included in the government's Public-Private-Partnership fast-track plan.