Deputy Prime Minister Somkid Jatusripitak has directed Thai Airways International Plc (THAI) to finalise its comprehensive plan to purchase 23 aircraft worth over 100 billion baht by the end of this year.

Meanwhile, the airline's new management team has vowed to get the national flag carrier back in the black by 2022, reversing heavy losses in recent years.

Speaking while visiting THAI's headquarters Thursday, Mr Somkid said the government is ready to support the airline to move forward but the airline needs to have clearer strategic plans, particularly for aircraft procurement.

The strategic and purchasing plan must contain clear efficiency strategies along with details on how it will boost competitiveness, manage revenue, traffic and routes, aircraft utilisation and workflow, he said. 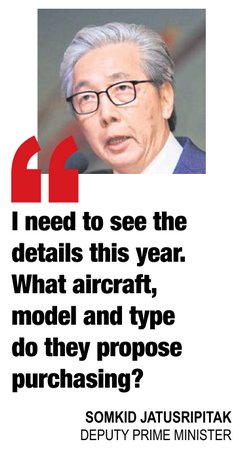 "For the issue of aircraft purchases, I need to see the details this year. What aircraft, model and type do they propose purchasing?" he added.

The company earlier proposed a 23-aircraft procurement plan with a total value of over 100 billion baht to the State Enterprise Policy Committee and the National Economic Social Development Board (NESDB). Both agencies gave the green light. However, the NESDB has asked for further details and asked the airline to tweak the plan.

The company's board on Wednesday decided that adding new planes is a necessary part of the airline's long-term plans. THAI's chairman Ekniti Nitithanprapas said THAI may not need to purchase all the 23 aircraft, but some will be needed for its future strategic and business direction. THAI also needs to dump some old planes, he said.

In addition, the airline may opt for smaller aircraft but this will depend on new strategies and routing management, he said.

"In fact, we have still not finalised what aircraft and type we need to buy because we have yet to finalise financing. We have three months to work on the details,'' Mr Ekniti said.

His assessment came the same day the flag carrier presented its turnaround plan to the government, with the ultimate goal of becoming a premium airline. Mr Ekniti said the ageing fleet was expensive to maintain, which contributed to the losses.

According to Mr Somkid, THAI's management needs to learn lessons from the Japanese national carrier Japan Airlines, or JAL. The JAL chairman, who visited THAI recently, said it took eight years to turn around the airline's fortunes and it is now now one of the world's top airlines.

While Mr Ekniti added the airline aimed to join the top five airlines in the world by 2022. To achieve that goal, the airline must turn a profit and enter more airline alliances. THAI's new president Sumeth Damrongchaitham said THAI aims to get back into "sustainable" profit from 2022.

During the past 10 years, THAI's market share fell from 37.1% to 27.1% due to the emergence of low-cost airlines and tough competition.

Though the national flag carrier is facing a challenging situation, Mr Somkid said he believes it can seize a huge opportunity, now the economy is improving.

Apart from that, Thailand is among the world's top tourist destinations with international arrivals reaching 34-35 million last year and more than 100,000 flights operating in and out the kingdom.

THAI has more room to grow both its aviation and non-aviation businesses, he said. One recent move is a collaboration with Rolls Royce to open a testing and research centre for Trent XWB engines, located at THAI's Engine Test Cell at Don Mueang airport.

THAI will have to pay a hefty bill to rejoin the ranks of the world's top airlines. The carrier has 89 planes, the THAI website says. The fleet's average age is 9.3 years, compared with 7.6 of Singapore Airlines, one of its key rivals.

The two airlines used to be neck and neck as the best airline in the world until THAI got into heavy debt and lost competitiveness.

HANAU, Germany: At least eight people were killed in two shootings at shisha bars in Germany, with an unknown number of attackers still at large, police and media said.

The coronavirus outbreak is likely to trim Thai exports to China by 1% in the first quarter of 2020 to about US$2.5 billion, according to joint estimates of the Thai National Shippers' Council (TNSC) and the Commerce Ministry.