Eighteen weapons and almost 1,000 rounds of ammunition for various types of firearms were seized from a house of a 29-year-old man who is a nephew of the owner of a tobacco factory in Kanchanaburi. (Photo by Piyarach Chongcharoen)

KANCHANABURI: A nephew of a tobacco factory owner was arrested and 18 weapons with almost 1,000 rounds of ammunition and some crystal methamphetamine seized during a police-military raid on his house in Tha Maka district on Saturday.

Sirachai Siangchee, 29, of Tha Maka district, was taken from a pub in Ban Pong district of neighbouring Ratchaburi to Tha Rua police station in Tha Makha district of Kanchanaburi early Saturday for interrogation after police received information that he was involved with illicit drugs.

During the interrogation, Mr Sirachai, alias Sia Ping, admitted he had been using drugs. Police then searched his car and found a small amount of crystal methamphetamine and a pistol with seven bullets inside.

A combined team of police and soldiers later searched his house in Tha Maka district, where they uncovered 12 pistols and six rifles, as well as 992 rounds of bullets for various types of weapons, 228 of which were for M16 rifles.

Mr Sirachai, a nephew of the owner of a private tobacco firm in the province, said he was a firearms collector. He had bought some of the seized firearms and others were mortgaged with him by other people, he added.

Police initially pressed charges of possessing illicit drugs, illegal possession of firearms and carrying them in public areas without permission. The investigation is continuing to find out whether any of the weapons had been used in any attacks. 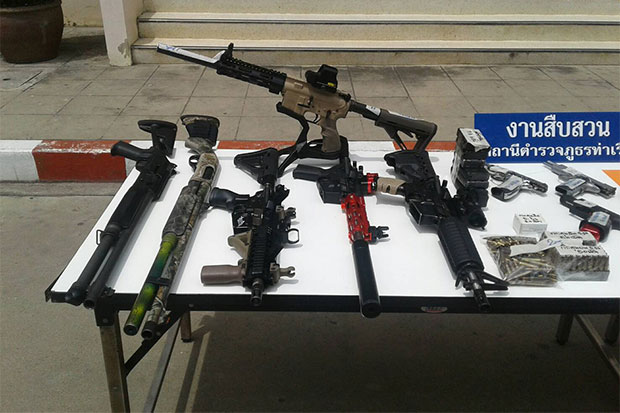 Six rifles are among firearms seized from the house of Sirachai Siangchee, 29, in Kanchanaburi. (Photo by Piyarach Chongcharoen) 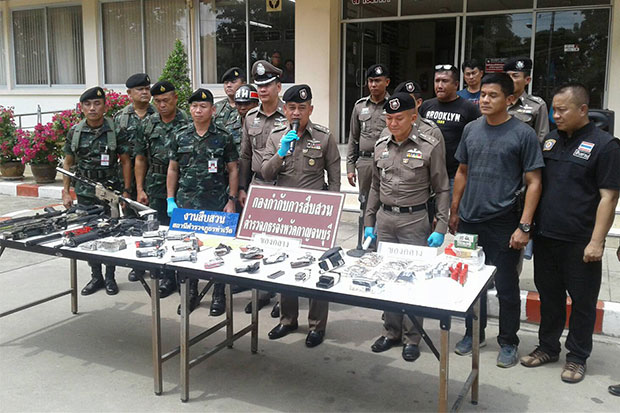 The seized weapons are put on display during a joint police-military press conference in Kanchanaburi. (Photo by Piyarach Chongcharoen)