The plan for a single visa for "Five Chiang Cities" will be proposed to spur tourism among four countries in the Mekong Region and add quality tourists to Chiang Mai and Chiang Rai provinces of Thailand.

Ahead of a mobile cabinet meeting in Chiang Rai and Lampang that is expected to be held soon, both government and private agencies in Chiang Rai have stepped up to discuss the scheme, which started about two decades ago to link these cities and promote tourism. 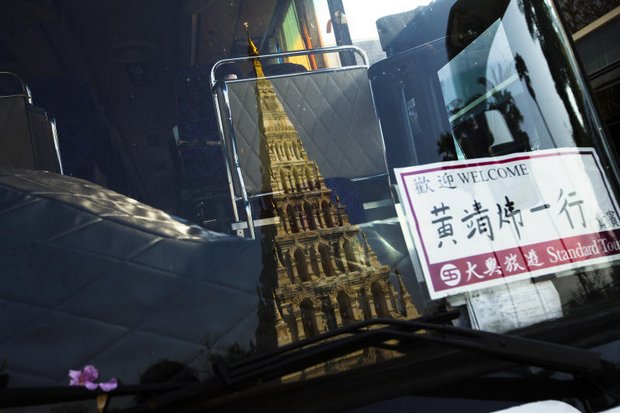 President of the Association of Northern Tourism Federations, Kitti Tissakul, said Thailand will reap the rewards from the scheme because Chiang Mai and Chiang Rai can benefit from the flow of Chinese tourists who are visiting the other 3 cities, especially from Jinhong; as well as South Korean, Japanese, and French tourists who visit Luang Prabang.

With a single visa in place, tourists are more likely to cross over to the two Thai provinces under the scheme.

With about 14 million foreign tourists visiting Chiang Rai and Chiang Mai alone each year, increasing the number in the five cities to 30 million is within reach.

The policy was initiated a while back by the Chiang Rai Chamber of Commerce, and private and public sectors to promote Thai tourism using the strength of Chiang Rai and Chiang Mai's international airports. 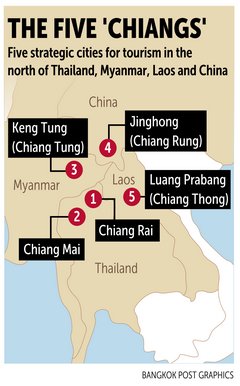 While the Asean regional bloc has its vision of a single visa in the same manner as the European Schengen Visa, Chiang Rai and Chiang Mai should be used as pilot areas under the law, to test one-stop services and a single visa policy, he said.

He said representatives from the four countries agree that border control is one obstacle to the growth in tourism in the Mekong region, and that they want to push the discussion of a one-stop service and a single visa to an Asean intergovernmental platform such as the Asean Summit, in which they look forward to discussing the matter.

"These challenges can be addressed while we forge ahead with the project," he said.

Challenges can also be addressed using a single database shared by all four countries to alleviate the security concerns, he said.

Sert Chaiyananta, head of Chiang Rai's tourism and sports office, said Chiang Rai is a strategic province connecting to the five Chiang cities which are interwoven through cultural ties and unique identities.

The scheme will play to the development of quality tourism that stays true to the roots and identities of the five cities, which are reflected through food, culture, and its people, said Mr Sert.

Mr Sert said Chiang Mai has evidence of prosperity both at present and from the past, and the province's food and arts scene is booming, he said.

Chiang Tung's Buddhist legacy can be seen through architecture, while Chiang Thong is known for its nature and people. Chiang Rung has clear connections with Thailand as evidenced by the similar language, Mr Sert said.

"What is important now is to come up with a plan and sell it to global market," he said.

Chiang Rai governor Prajon Pratsakul said number of tourists to Chiang Rai and Chiang Mai rose by 31.51% over the past year and the number is on the rise.

He said transportation in and between the five cities are quite developed. Chiang Rai and Chiang Tung have an agreement allowing inter-city commuting, while eight airlines service Myanmar's Tachileik airport.

The construction of a new bridge across the Mekong in China and the high-speed train project linking Xishuangbanna with Myanmar and Laos will create more network, on top of existing connections, to Chiang Rai and Chiang Mai, he said.