A two-year-old elephant is found lying in muddy water in pain in Chumphon's Thung Tako district when wildlife officials spot them on Friday. The elephant calf is rescued and taken to the Ngao Waterfall National Park's office for treatment on Saturday morning. (Photo taken from Phokrasung Pichai Facebook page)

CHUMPHON: A wild elephant calf, called "Ai Duan" by local residents, was rescued on Saturday after falling from a steep mountain in Thung Tako district.

The bull elephant, aged around 2 years, was spotted lying in a muddy swamp at the foot of a mountain in Ban Chan Rane of tambon Tako on Friday by a patrol team of national park and wildlife officials.

The calf appeared to have suffered back injuries and was struggling hard to lift itself from the swamp, about 3-4 metres wide and 60-70cm deep. The animal was believed to have fallen from the steep mountain 1-2 days ago before it was found. The officials immediately called the Ngao Waterfall National Park, Thai media reported.

Somchate Chanthana, head of the Ngao Waterfall National Park, immediately sent officials to help the animal. A backhoe was used to lift the pachyderm from the muddy water onto a truck, which transported it back to the national park's office on Saturday morning.

Somart Laohachot, chief of the provincial livestock office, rushed to the scene to give first aid to the injured elephant. A team of veterinarians arrived on Saturday to treat the animal.

Local residents brought grass, bananas and fruit to visit the elephant calf, which they called "Ai Duan" due to its short trunk.

The locals said Ai Duan often invaded their farmland. However, they took pity on it when it was injured. 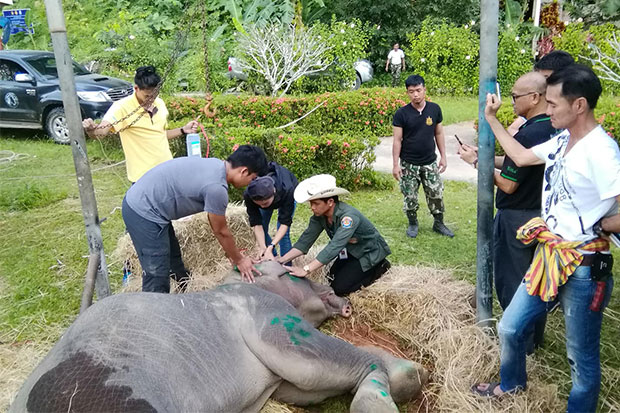 The injured wild elephant is taken back from the forest to the Ngao Waterfall National Park in Chumphon and receives treatment. (Photo taken from Phokrasung Pichai Facebook page)