Over-popular Maya Bay, made famous by the movie "The Beach" starring Leonardo DiCaprio, is now off-limits to visitors indefinitely, to allow the damaged ecosystem to fully recover. (File photo)

The closure of world-class tourist site Maya Bay in Krabi to visitors has been extended indefinitely to allow the damaged marine ecosystem to fully recover, drawing immediate protests from tour operators.

The bay and its famous beach, on Koh Phi Phi in Hat Nopphrat Thara-Mu Koh Phi Phi National Park, have been closed since June 1, initially for the monsoon season and then extended for another month from Oct 1 to Nov 1.

The decision to keep it closed indefinitely was made by the Department of National Parks, Wildlife and Plant Conservation at a recent meeting to discuss the condition of the bay and its marine environment, seriously damaged by hordes of day-tripping tour groups.

Park chief Worapoj Lomlim said on Tuesday that during the meeting experts expressed concern about the condition of the coral reefs and progress in tree planting at the site, saying the area's closure for four  months or even six months, was not enough.

An announcement signed on Sept 28 by National Parks head Thanya Nethithammakul extended the closure of the bay indefinitely from Oct 1 onwards, until the marine and coastal resources and environment system returns to normal.

Maya Bay, part of an island in Krabi’s Mueang district, became globally famous after the Movie "The Beach", starring Leonardo DiCaprio, was shot there in 1999.

Mr Worapoj said his agency, working with other agencies, had rehabilitated coral reefs in the bay by already planting more than 1,000 corals, and would keep expanding the area.

Coral reefs required time to fully grow, and experts from several agencies shared the view it was too early to reopen the bay, Mr Worapoj said.

Wattrapol Chanthararo, chairman of the Koh Phi Phi tourism business club, said the closure of Maya Bay would certainly affect tourism on the island as a whole. Authorities had not sought the views of any local residents before making the decision.

Tourists who had earlier booked tour packages to visit the bay would not be able to enter the area. This would affect tourism not just on Koh Phi Phi but in Krabi province in general, he said.

He would call a meeting of club members on Oct 8 or 9 to discuss ways around the problems caused by the department’s latest announcement. He would forward their conclusions to the Krabi governor and the related agencies. 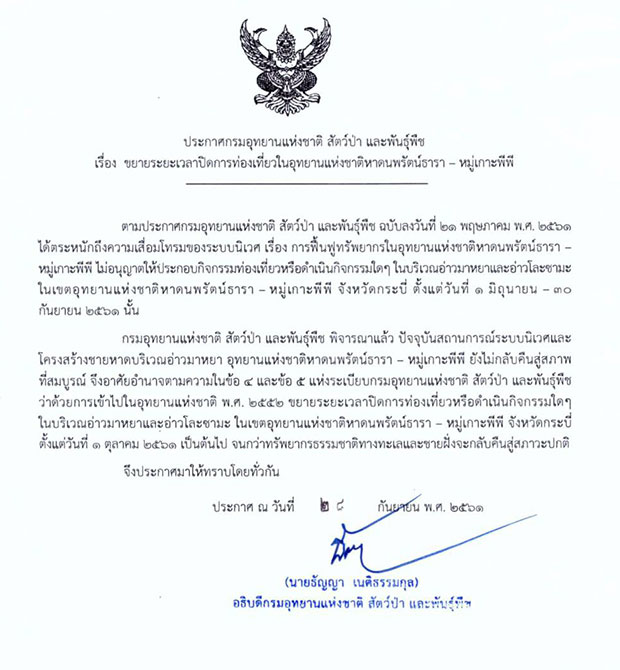