Police and forensic officers at the teahouse where a woman and her son were slain by motorcycle gunmen on Thursday morning in Pattani's Thung Yang Daeng district. (Photo by Abdulloh Benjakat)

PATTANI: The wife of a local contractor and her son were shot dead in full view of customers at a teahouse in Thung Yang Daeng district on Thursday morning.

They were slain by gunmen who arrived on motorcycles at the roadside shop in Ban Phithaen around 8.30am, said Pol Lt Col Naris Kajae, deputy chief at Thung Yang Daeng police station.

Arom Chomphet, 46, of Yala, and her son Kawin Chawitsakun, 27, were shot by two of four men who arrived on two motorcycles. The pillion riders opened fire in front of local residents who were drinking tea and eating there.

Arom died on the spot. Her son was badly wounded and later pronounced dead by a hospital.

Police found spent 9mm bullet cartridges scattered on the road. They were examining recordings from surveillance cameras in the area and along the escape route.

It was not known if the murders were motivated by a personal conflict or the on-going unrest.

The slain woman and her husband Prasong Chomphet, a contractor, sell marble from their business in Yala province.

The shooting occurred shortly after the woman and her son sent workers to do a job at a nearby mosque. 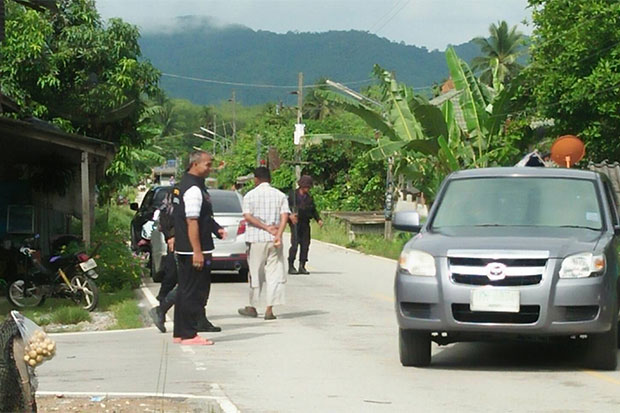