Poaching suspects may get off scot-free
Thailand
General

Poaching suspects may get off scot-free

Poaching suspects arrested and charged with illegal poaching in Sai Yok National Park on Sunday might be able to escape successful prosecution due to insufficient evidence, a source at the Department of National Parks, Wildlife and Plant Conservation said.

Fifteen people, including a senior district official and three children, were arrested on Sunday and charged with poaching in Sai Yok National Park in Kanchanaburi after they were found with guns and several Asian bearcat paws, a protected species under the Wildlife Protection Act.

Department of National Parks, Wildlife and Plant Conservation spokesman Sompoj Maneerat voiced his concern Monday that "insufficient evidence" might lead to all culprits escaping the charges.Some of the suspects testified that they had bought the Asian bearcat paws from local villagers, and said that they were all not involved in illegal poaching, adding that it is quite challenging for the investigative team to determine whether the guns, bullets and knife found at the scene were used to kill the animals.

"If the evidence is insufficient, they might escape the main charge. But they may all still be found guilty of other charges, including illegal possession of wildlife carcasses, possession of firearms without licences and illegal entry to the park," he said.

Rangers began Monday to search for the area where the suspected hunting occurred.

They said they believe the hunting party tried to cover up their activity.

The arrests were made by Sai Yok park rangers who were looking into a report that a convoy of six off-road vehicles entered the park on Saturday and did not come out. The group, which consisted of 11 adults, one youth and three children, were leaving when they were stopped.

A search of the six vehicles uncovered a rifle with a silencer, a pistol, ammunition and four paws from a binturong, also known as an Asian bearcat, weighing 920 grammes. One of the men identified himself as Watcharachai Sameerak, district chief of Dan Makham Tia, Kanchanaburi province. He initially refused a body search and threatened to sue the authorities, Park chief Panatchakorn Phothibandhit said.

All were taken to the park office for questioning. The group claimed they were making merit at Tao Dum Temple in the forest and then set up camps nearby, saying that the carcass belonged to one of the drivers. The adults face nine charges including possession of wildlife carcasses and poaching. 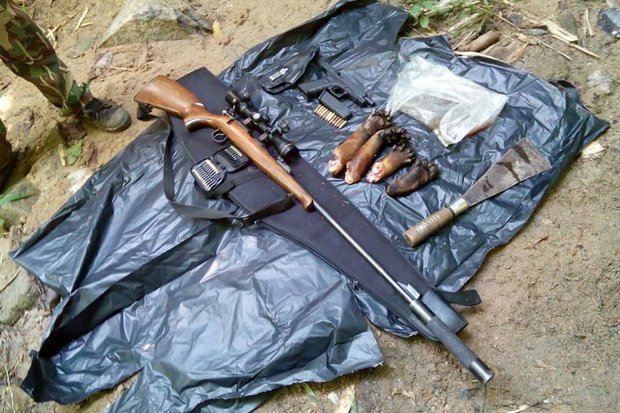 Weapons and bearpaws were among items seized when rangers stopped and searched vehicles in a convoy in Sai Yok National Park in Kanchanaburi province.

Mr Panatchakorn contacted soldiers and local police for reinforcements, who found a pistol and ammunition on Mr Watcharachai.

Kanchanaburi governor Jeerakiat Phumsawat said Monday Mr Watcharachai had been dismissed as Dan Makham Tia district chief, and two volunteers in the district had been suspended pending a probe.

This is the second case of illegal hunting in Kanchanaburi, after a group of hunters led by Italian-Thai Development Plc president Premchai Karnasuta, was arrested and charged with poaching in Thungyai Naresuan Wildlife Sanctuary in February.