Supplied photos show what appears to be an engine resting on the ground (left) and part of the landing gear of the halted Thai Airways Boeing 747-400 amid ploughed-up soil, after it ran off the runway on landing at Suvarnabhumi airport in Samut Prakan province late on Monday night.

A Thai Airways Boeing 747-400 carrying 97 passengers and 18 crew members from Guangzhou slid off a runway while landing at Suvarnabhumi airport in heavy rain late Monday. There were no injuries.

Pratana Patanasiri, Thai Airways vice president for aviation safety, said flight TG679 departed from Guangzhou at 8.58pm local time and arrived at Suvarnabhumi airport at 10.48pm. It was landing in heavy rain and slid off a runway.

When the plane finally came to a stop, slides were deployed and passengers and crew members were evacuated and moved safely to the passenger terminal. No one was injured. Passengers were served with food and beverages while waiting for their baggage, Mr Pratana said.

The airline and authorites are investigating.

Media reported the plane blocked Runway 19R and it was closed pending its removal.

Dalat Asawet, deputy director of Suvarnabhumi airport, said later on Tuesday that the western runway would reopen before the end of the day.

On the night of Sept 8, 2013 THAI's Airbus A330-300 plane also serving flight TG679 from Guangzhou skidded off Suvarnabhumi runway on landing and caused flight delays.

In that incident THAI badly damaged its image by trying to paint over the aircraft's insignia and distinctive tail, causing widespread mirth at the completely unsuccessful cover-up.

Forty passengers were injured in that incident, 14 of whom had to be hospitalised. Authorities blamed that incident on landing gear malfunction. It took three days to remove the plane. 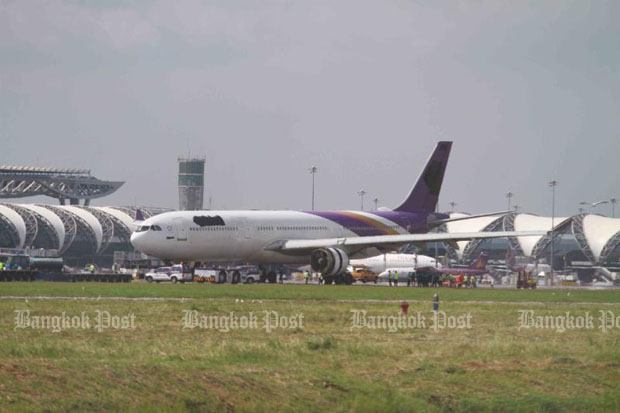 File photo: The THAI Airbus A330-300 that skidded off the runway at Suvarnabhumi airport on Sept 8, 2013, with the airline name painted over.