A Kanchanaburi court has bailed a deputy district chief and 10 others accused of poaching bearcats in Sai Yok National Park and cutting off their paws (centre) presumably for 'gourmet' dining. (Photo Courtesy Sai Yong National Park)

A court has granted bail to Watcharachai Samirak, deputy chief of Dan Makham Tia district in Kanchanaburi, and 10 others charged with hunting wildlife in Sai Yok National Park over the weekend.

They were taken to Kanchanaburi Provincial Court Tuesday by Sai Yok police who sought to further detain them.

However, the court later approved their bail requests with 200,000 baht each in surety.

Mr Watcharachai was dismissed as chief of Dan Makham Tia district in Kanchanaburi as a result of the charges.

Meanwhile, Sai Yok National Park officials handed over firearms, ammunition and severed binturong (bearcat) paws allegedly possessed by the suspects to police for further investigation. The binturong is a protected species under the Wildlife Protection Act.

The suspects were detained in possession of a rifle fitted with a silencer, a pistol, ammunition and the four paws, which weighed 920 grammes.

The park officials also filed a fresh charge against the suspects of firing a weapon in the national park, bringing the total number of charges against them to 10. The charges include possession of wildlife carcasses and poaching.

The weapon firing charge was added after 31 bullet casings were found on the trail the suspects took as they made their way out of the park. 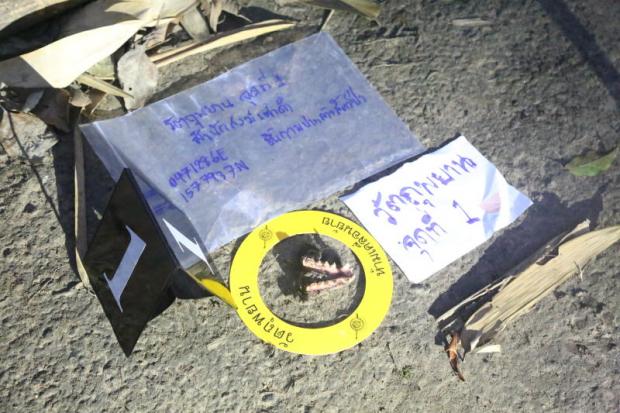 Part of an animal's jaw is seen at a campsite believed used by the suspected poachers. Piyarach Chongcharoen

Sai Yok National Park chief, Panatchakorn Phobandit, said it was likely the suspects threw the casings out of the windows of their off-road vehicles. They were found about seven metres from the track.

Officials will examine which firearms the casings came from and who pulled the triggers, he said.

Mr Panatchakorn insisted park officials never gave the group permission to enter the park as the suspects have claimed.

Meanwhile, the authorities say they have found wildlife remains in the cooking area of the campsite used by the suspected poachers, who were detained as they were leaving the park on Sunday.

The find appeared to contradict the suspects' claims that the four severed paws from a binturong found in their possession had been purchased from villagers during a pilgrimage to a Buddhist monastery in the forest, assistant park chief Netnapha Ngamnet said Tuesday.

She said she believed the spent ammunition had been discarded by the suspects to dispose of evidence, before they were stopped by the authorities in Sai Yok district.

In a forest area known as Pa Khao Thalu, about 1.2 kilometres from where the suspects were detained, more spent casings were found.

A bloodstained plastic bag was also found about seven metres from where two of the six off-road vehicles were stopped for a search on Sunday, along with bloodstains in one of the vehicles.