Prinya Jaravijit, 35, (centre) is arrested at Suvarnabhumi airport upon his return from the United States late on Wednesday night. He is the alleged mastermind of the 797 million baht bitcoin swindle. (Police photo)

The prime suspect in the network that allegedly swindled Finnish investor Aarni Otava Saarimaa out of almost 800 million baht in bitcoin was arrested after returning to the country from the US on Wednesday night, police said.

Prinya Jaravijit was nabbed at Suvarnabhumi airport's inbound immigration zone at 11.30pm. He flew back to Thailand on Asiana Airlines' Flight OZ741 from South Korea. He was en route from the United States.

He was reported to have left Thailand after his younger brother and actor Jiratpisit "Boom" Jaravijit, also allegedly linked with the the network, was apprehended on Aug 9.

Mr Prinya was wanted on charges of conspiracy to defraud and money laundering. After his arrest at the airport the suspect was sent to the Crime Suppression Division (CSD) where he was quizzed all night.

Police are considering whether to object to bail as he poses a flight risk, Pol Col Chakrit said, adding Mr Prinya denied all charges but gave confusing accounts during interrogation.

Mr Prinya consulted with his lawyers regarding the interrogation. He was believed to be in the process of applying for bail.

His arrest came after police said on Wednesday that Mr Prinya's passport had been revoked by the Foreign Ministry.

Police stressed that if he stayed in the US he would be doing so illegally, leading to more charges and deportation. 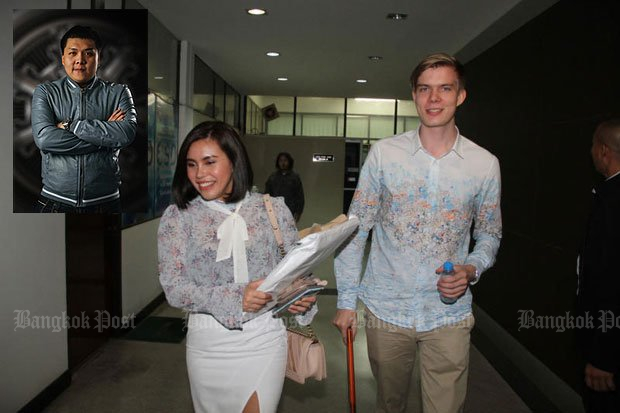 Mr Prinya (inset) is accused of masterminding a sting that resulted in the theft of bitcoins worth 797 million baht from Finnish investor Aarni Saarimaa, right, through his investment proposals. The victim and his Thai business partner Chonnikan Kaewkasee, centre, filed their complaint with police in January.

The parents were said to have received 90 million baht wired from Mr Prinya.

He said Ms Lertchatkamol received money from Mr Prinya before passing it to her husband.

Mr Prinya also transferred money he received to Mr Tanasit, who distributed it to others, according to Pol Col Chakrit, who said this was money laundering.

The Finnish investor, with Thai businesswoman Chonnikan Kaewkasee, complained to the CSD in January about losing bitcoin worth 797 million baht to Mr Prinya and his group, who were supposed to invest the money in shares of three firms, including Expay Software Co, in June last year.

The syndicate allegedly did not spend the money on the agreed investments, but stole much of it.

Charges were withdrawn against stock trader Prasit Srisuwan and Expay shareholder Chakris Ahmad last month after a settlement was reached.