Forensic police collect evidence at the house in Khon Kaen, where an American retiree was found dead on Thursday night. Police are investigating the death. (Photo by Chakkrapan Natanri)

KHON KAEN: An American retiree was found dead inside a rented house in Muang district on Thursday night. Police are investigating.

Police, hospital staff and rescue workers went to the premises about 7.30pm after neighbours reported a strong smell eminating from it.

They also noticed the smell when they arrived at the two-storey commercial building on Srichan Road in downtown Muang district.

The door was locked, so an officer used a lever to force it open. Inside, a foreign man about 170cm tall was lying dead on a bed on the first floor.

Police believe he had been dead at least three days. 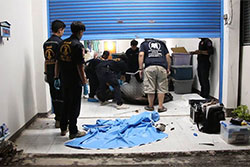 Sa-nga Buakong, deputy chairman of Khon Kaen Hospital community, said the man was a former American soldier. He was accompanied by a Thai woman when he  first rented the building seven years ago. He had not seen the woman again.

Every day, the American had walked around the community. However, nobody had seen him for the last 2-3 days. On Thursday night, people walking past the door  noticed a foul smell. They alerted police, Mr Sa-nga said.

Investigators had learned he sought treatment at a hospital for an acute hernia. Plastic bags of medicine were found inside the house.

However, police had not decided on the cause of death. They were investigating, Pol Col Chamlong, said.