Boy, 5, falls to his death from 8th floor of Hat Yai hotel

A five-year-old boy fell to his death from the eighth floor of a hotel in Hat Yai, Songkhla, on Thursday night. (Photo by Assawin Pakkawan)

SONGKHLA: A five-year-old boy fell to his death from the eighth floor of a hotel while his father was taking a shower, in downtown Hat Yai district on Thursday night.

His father had just arrived from Malaysia, on a trip to visit his family.

The boy fell from a fire exit about 7pm, landing on the road at the front of the hotel on Niphat Uthit Road in Hat Yai municipal area, Pol Capt Sansern Musiksiri, deputy investigation chief at Hat Yai station, said.

The boy's mother, Siriporn Sae Kuay, 35, of Phichit province, was waiting in the ground floor lobby of the hotel at the time, and his Malaysian father was in their room having a shower. 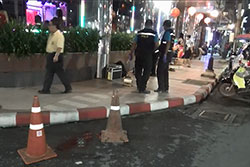 Forensic police collect evidence on the ground in front of the Hat Yai hotel where the boy fell to his death. (Photo by Assawin Pakkawan)

A security camera recording showed the boy leaving the room and playing around near a fire exit door.

The boy then opened the fire exit door and stepped through onto the small landing, and it closed behind him. The door cannot be opened from the outside.

A short time later he fell to his death

The mother told police she, her son and relatives had travelled from northern Phichit province to see her husband, who was visiting from Malaysia.

The father was in a state of shock after the accident, unable come to terms with the loss of his son after they had just met again.

Police were investigating whether anyone should be held responsible and whether the fire exit contributed to the incident. 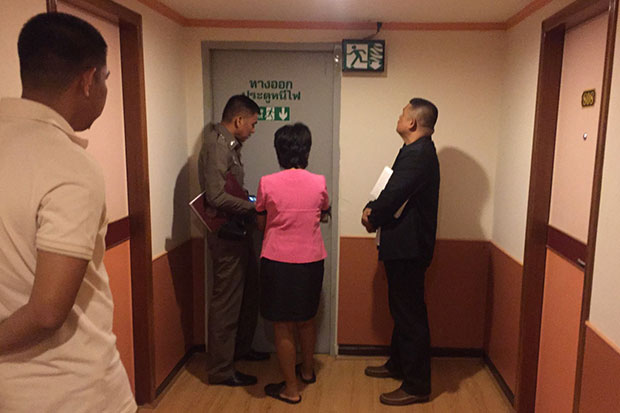 A police officer inspects the fire exit door at the hotel. (Photo by Assawin Pakkawan)

Seven airlines in Thailand have formed an association to deal with the pandemic and pave the way for vaccine passport cooperation.

The Indonesian foreign minister has asked her Myanmar counterpart to "prioritise the safety and wellbeing" of his country's people in a three-way meeting in Bangkok.

Vaccine rollout to start next Monday