Nine Myanmar nationals were burned to death and six others injured after their van hit a roadside tree and burst into flames in Kamphaeng Phet province on Sunday.

The Sawang Rescue unit in the northern province said the accident took place on Sunday morning on Phahon Yothin Road in Khlong Khlung district. Rescuers found the van engulfed in flames after slamming into a tree. Nine Myanmar nationals in the van were killed and six others injured, including the Thai driver.

An initial investigation found the van may have skidded off the highway due to heavy rain in the area, he added.

The identity of the killed and injured passengers and driver have not been disclosed.

In another road tragedy on Sunday morning, six people died when their car plunged into a canal from a bridge in Ayutthaya. 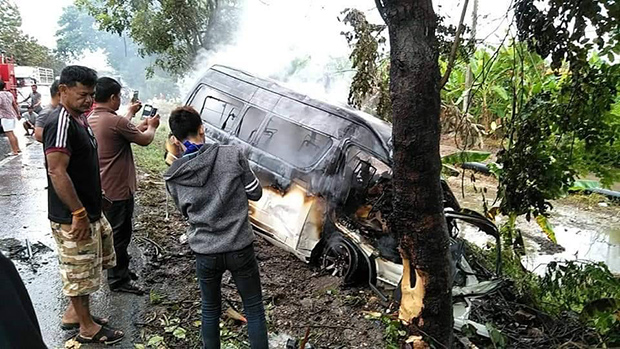 The wreckage of a van is seen in Kamphaeng Phet on Sunday. (Photo from Sawang Rescue Kamphang Phet Facebook account)