A video clip shows bewildered Thai and foreign travellers booked on flight TG669 stranded at Guangzhou airport in China for almost 10 hours on Oct 28 after the flight was cancelled. (grabbed from TV)

Criticised for its treatment of passengers in Zurich early this month, Thai Airways is again on the defensive after passengers were stranded in Guangzhou on Sunday.

The assertion came after photos and a video clip were posted on social media showing bewildered Thai and foreign travellers booked on flight TG669 stranded at Guangzhou airport in China for almost 10 hours on Oct 28 after the flight was cancelled.

The airline statement, which was only in Thai, apologised to all 309 passengers for the inconvenience and explained that the aircraft used on flight TG669 had developed a technical fault  and technicians were called in to examine it.

While the checks were being made, staff and crew had been instructed to provide food and drinks to passengers. As there were many passengers, this took time to prepare, the statement said.

It was found that spare parts had to be sent from Bangkok. The captain then decided to abide by maximum aviation safety standards by cancelling the flight.

The airline transferred some passengers to other airlines with flights to Bangkok that day. Others took flight TG679 on Oct 28, which left Guangzhou airport at 10.20pm (local time) and arrived at Suvarnabhumi airport at 12.33am.

The remaining passengers were taken to a hotel and provided with dinner and breakfast pending their rescheduled departure on flight TG669 on Oct 29. The flight left Guangzhou at 3.33pm (local time) and arrived at Suvarnabhumi airport at 6pm.

Ground staff would contact passengers about getting their luggage, the airline said.

On Monday a passenger on the cancelled flight, Facebook user Sureeporn Thammarak, posted a message and a clip showing passengers milling about in confusion at Guangzhou airport on Sunday. She criticised the airline for not sending any staff to inform passengers what was happening.

No food or drinks were provided for the passengers after the flight was delayed, she wrote. Only afterwards had airline staff explained to the passengers that the aircraft had a technical problem and the flight had been cancelled.

On Oct 11, a  Thai Airways flight from Zurich to Bangkok was delayed for more than two hours after inactive pilots returning to Bangkok on rotation demanded two passengers give up their first class seats so they could have them.

The incident created a furore, with THAI again apologising to passengers and insisting its passenger care was up to international standards. 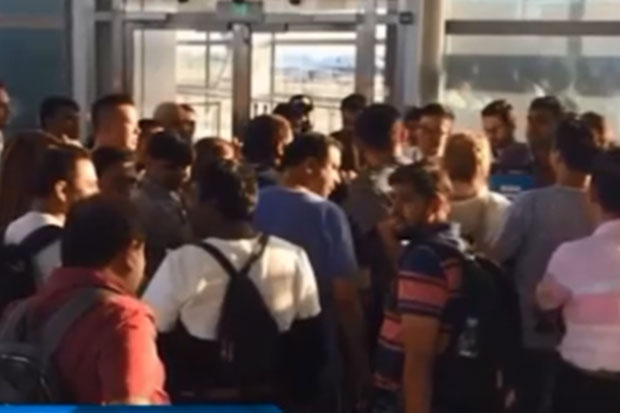 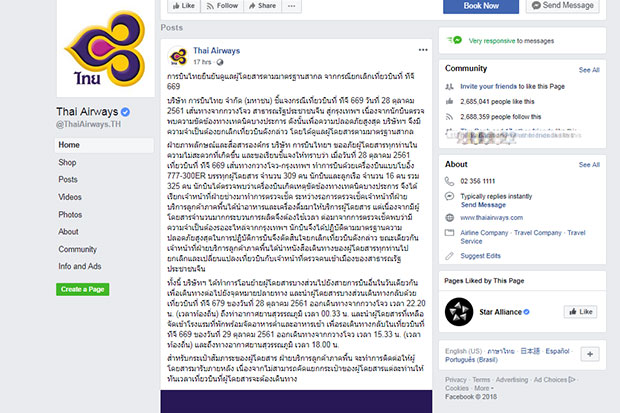