Video game addiction up by 400%
Tech

Video game addiction up by 400%

Surge blamed on its classification as 'sport'

Despite the Mental Health Department's release of statistics on Wednesday, the e-sports booths and an e-sport competition including virtual-reality equipment, are likely to be among the most popular areas at the Commart Work 2018 expo from Thursday through Sunday at Queen Sirikit National Convention Center. (File photo by Pornprom Satrabhaya)

The number of children suffering from video-game addiction surged by 400% last year, according to the Department of Mental Health, which is calling for stricter controls on playing video games, or so-called e-sports.

"We are very surprised by this unusual rise in the number of children going to see psychiatrists for video-game addiction. The trend began when the Sport Authority of Thailand (SAT) legally classified video games as e-sports in July last year," said Yongyud Wongpiromsarn, adviser to the department told a seminar on Wednesday. 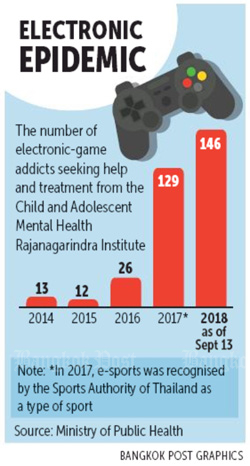 In 2016, there were 26 cases of video game-addiction recorded by the Ministry of Public Health's Child and Adolescent Mental Health Rajanagarindra Institute (CAMRI), but the number soared to 129 in 2017, when the SAT registered video games as e-sports.

At present, there are 146 youths receiving treatment for video game addiction.

It takes six months of treatment to cure video game-addiction at state mental health clinics, which cost between 50,000-250,000 baht annually.

The classification of video games as e-sports is a hotly-debated topic among sporting communities across the globe.

Some international sport events, including the recent Asean Games in Indonesia, included an e-sports demonstration in its rundown.

Meanwhile, countries such as Japan and South Korea have yet to classify video games as e-sports due to ongoing concerns over copyright as well as violent content.

Dr Yongyud said the classification of video games as e-sport has helped the promotion of e-sporting events.

There are about one million e-sports players in Thailand, 200,000 of whom are facing health and career risks, while 20,000 of them are seriously addicted to video games, according to the department.

"Games are not the culprit [of addiction], a lack of discipline and self-restraint is. More children are playing e-sports simply because they can make money from it," Mr Prasopchoke told the Bangkok Post in a phone interview.

"Game addicts are not e-sports athletes. Athletes do not play games all the time. They set schedules to play and take a rest for fitness," he said adding children should develop the discipline to stay away from video games.

"Without discipline, they can end up as game addicts," he said.

Anat Ruangwong, founder and manager of Xavier E-Sports club, concurs with Mr Prasopchoke, saying most e-sports athletes will practice for two hours daily and spend another hour to plan their strategies.

"Many children were addicted to video games because they believed that the more they play, the better they will become. But after they join an e-sports club, they will realise that it is about the quality of their practice runs, not the quantity that matters," he said.

Meanwhile, Patiphan Chaiwong, 15, a member of Thailand's national team for the 2018 Overwatch World Cup, a role-playing game, said he used to be a game addict who played 13 hours a day during the holidays and five hours on a school day.

After joining e-sports, he only plays during team practices from 6-8pm each day, and spends about one hour discussing strategies with his team.

"I used to have poor health. I had breathing problems and sometimes my legs would go weak," said Patiphan, who has been playing video games for almost a decade, but only joined his e-sports team six months ago.

"Nowadays I set some time to exercise and take good care of my health. I am better now."

"At one point, I realised that I was just wasting my time playing games. After this realisation, I looked for a team to join," he said.

"My parents were unhappy that I played games a lot. But after I managed to prove myself, they became my biggest supporters," he said.