Before Prime Minister Prayut Chan-o-cha and the 500 invited guests at Government House got down to the business of startups, they watched a rap video that was an obvious if lame response to Prathet Ku Mee. (YouTube/naewna)

An official government <i>Thailand 4.0</i> rap video was played to introduce Prime Minister Prayut Chan-o-cha's remarks to about 500 attendees of a conference on startups at Government House on Thursday.

It was an obvious response to the killer hip-hop production of Prathet Ku Mee (What My Country's Got) which passed 25 million YouTube views on Thursday, still going strong.

Most fans of rap and hip-hop would find Thailand 4.0 lame. It features a melodic sampling of the national anthem and lyrics such as "There are many talented Thais, if we work together, we'd be stronger, stronger" and "Gen M, Gen Z, Gen whatever, if you all agree, it'd be easier, easier."

Gen Prayut said at the outset of the business event that he was happy to hear a rap song with appropriate lyrics. He said some of the song's beats could be changed but the meaning of the words was good.

It received polite and scattered applause from the 500 young entrepreneurs and unicorn executives invited to the startup event.

Comments were sparse and more bemused than critical or supportive in the first hours after the video was posted on YouTube, where it had 900 views in the first 10 hours, and a like/dislike ratio of 3/22.

Gen Prayut has penned several patriotic ditties himself since seizing power in 2014, although none can challenge Prathet Ku Mee in online views.

Thailand 4.0 emerged after days of increasing frustration both by the government and police, notably national deputy chief Pol Gen Srivara Ransibrahmanakul, over the political and legal inability to arrest the "Rap Against Democracy" group or to ban the song.

Prathet Ku Mee has struck a strong nerve among - presumably - Thai young people, millions of whom will vote for the first time in an election that might take place on Feb 24.

The video provocatively references subjects considered generally taboo in society. It replicates the gruesome historic scene where a corpse hanging from a tree is continuously beaten as a crowd cheers on, based on an iconic image from the 1976 massacre at Thammasat University by police and right-wing groups of pro-democracy students. A group of 10 rappers takes turns delivering verses such as "The country that points a gun at your throat, claims to have freedom but has no right to choose," and "You must choose to either eat the truth, or bullets."

Government officials initially strongly denounced the song. Pol Gen Srivara insisted it could violate the country's Computer Crime Act by allegedly stirring up unrest. New government spokesman Buddhipongse Punnakanta, previously an organiser of the disruptive Bangkok Shutdown that led to Gen Prayut's coup, complained the song's lyrics attacked not only the military government but the country as a whole. 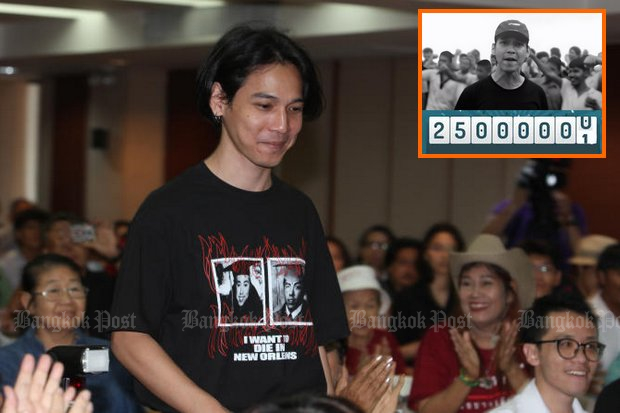 Several of the artists from Prathet Ku Mee appeared at an academic seminar at Thammasat University on Wednesday and received a warm welcome. The YouTube video shot past 25 million views on Thursday (inset), still going strong. (Main photo by Pawat Laopaisarntaksin)

But they all were forced to back down. Pol Gen Srivara Ransibrahmanakul claimed on Monday that the lyrics were insufficient evidence to launch a prosecution, so people were allowed to listen to, sing, and share the song. By then, millions already had.

Dechathorn Bamrungmuang, one of the rappers in Prathet Ku Mee, said at a Thammasat University seminar on Wednesday that he thinks the song grew quickly in popularity because hip-hop is becoming more and more popular around the world.

"When the song came out, there were both negative receptions and supportive messages to us," he said. "This made us feel like we can communicate with people through our music and that this song doesn't overstep any boundaries."