The new Michelin Guide has awarded stars to 27 restaurants, and this time including eateries outside Bangkok - in Phuket, Nonthaburi and Samut Sakhon. (Graphic courtesy Public Relations Department)

The second edition of the Michelin Guide is expected to boost the number of foreign and domestic tourists in Phuket and Phangnga, two popular resort provinces in the South.

Michelin released its guide yesterday for Bangkok, Phuket and Phangnga for 2019, the second edition of the Thai publication and the first to cover eateries outside Bangkok.

This year Michelin featured 217 dining and 67 lodging establishments, with a total of four two-star restaurants and 23 with one star.

PRU restaurant in Phuket was awarded one star, while 14 other restaurants on the island and Phangnga are in the "plate" and "bib gourmand" categories.

Phuket governor Phakaphong Tavipatana said the guide should help strengthen the tourism and gastronomy business in Phuket and Phangnga.

"Phuket received 10.1 million international tourists last year," Mr Phakaphong said. "However, arrivals from some markets such as China declined over the last few months due to a major boat incident in July [that killed 47 Chinese]. Overall, arrivals on the island are increasing."

He said Indian airline GoAir has just started operating from New Delhi, Mumbai and Kolkata to Phuket with a total of nine flights a week, while Lot Polish of Poland began service from Warsaw to Phuket on Nov 1 with one flight per week. 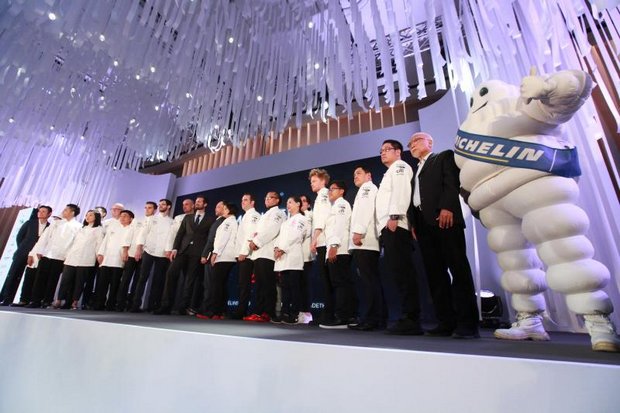 Chefs from Michelin-starred restaurants stand with Mr Poullennec (centre, in suit) at Wednesday's ceremony in Bangkok. The Michelin Guide issued a second edition expanding beyond the capital. (Photo by Phrakrit Juntawong)

Thai Smile Airways began offering direct services to Hong Kong this month with a total of seven flights a week running between there and Phuket. Uzbekistan Airlines and Indigo from India will add Phuket soon.

Yuthasak Supasorn, governor of the Tourism Authority of Thailand, said the Michelin Guide will also encourage domestic tourists from places like Bangkok to seek out new restaurants and ultimately generate more income for local communities.

"This year's selection highlights the diversity of culinary experiences, both within and outside of Bangkok," said Gwendal Poullennec, international director of the Michelin Guide.

For the 2019 edition, all of the two-star restaurants from the previous selection -- Gaggan, Le Normandie and Mezzaluna -- retained their previous ratings. The only restaurant to move from one to two stars was Suhring, which offers contemporary European dishes.

Of the 23 one-star establishments in the latest guide, Le Du and Gaa progressed from plate to one star. Eight are new entries.

PRU in Phuket, Ruean Panya in Samut Sakhon and Suan Thip in Nonthaburi are the first one-star restaurants beyond Bangkok.