All on board escape as ambulance bursts into flames
Thailand
General

All on board escape as ambulance bursts into flames

Flames engulf an ambulance on the Khon Kaen-Kalasin Road in Muang district of Khon Kaen on Saturday. All those on board escaped unhurt. (Photo from Koophai Khon Songkhao Facebook page)

KHON KAEN: A patient, relatives and nurses escaped unhurt before an ambulance carrying them burst into flames in Muang district on Saturday.

The incident occurred on the Khon Kaen-Kalasin Road at Promnimit village around noon. The ambulance, belonging to a private firm, was transporting a patient discharged from Srinagarind Hospital at Khon Kaen University, and relatives to their home in At Samat district of neighboring Roi Et, said police.

Fire trucks and firefighters rushed to the scene and quickly brought the flames under control.

Apiwat Porkhoksri, the driver of the ambulance, said he noticed smoke coming out from the front of his vehicle and pulled over onto the roadside. Shortly afterward, a fire erupted, prompting nurses and relatives to take the patient out safely. The ambulance was quickly engulfed in flames.

Police are investigating the cause. 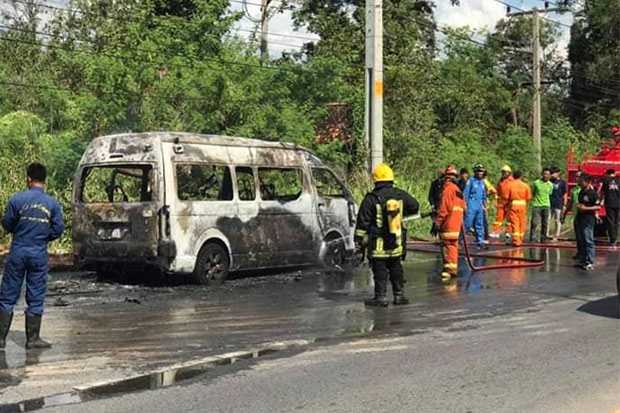