Farmers warned of legal action over drying paddy on roads

A farmer continues to dry paddy on Road 3047 in Lam Plai Mat district of Buri Ram province after a fatal accident on Nov 10. (Photo by Surachai Piraksa)

Wit Worawong, the director of the rural roads office in Buri Ram province, said farmers who use public roads to dry paddy are violating the Highway Act by obstructing vehicles. Violators are subjected to a fine of up to 60,000 baht and/or a maximum jail term of three years, the official added.

His warning followed a number of road accidents in Buri Ram, including one that killed a 15-year-old student in Lam Pai Mat district on Nov 10.

The student lost control of his motorcycle on Road 3047 after running into a pile of paddy dumped on the road by farmers. The driver died at the scene while a pillion rider was seriously hurt and is still under treatment at Buri Ram Hospital in Muang district.

Thamenchai police said the boy's parents had no intention of taking legal action against the paddy owners and took the body for a religious rite.

A woman was slightly hurt on the same day when her motorcycle slipped on a pile of paddy on a local road in Nang Rong district.

Local roads in several provinces have been used by farmers to dry their paddy amid unseasonal rainfall that could damage their crops. Spaces in their villages and near temples are already full of paddy. 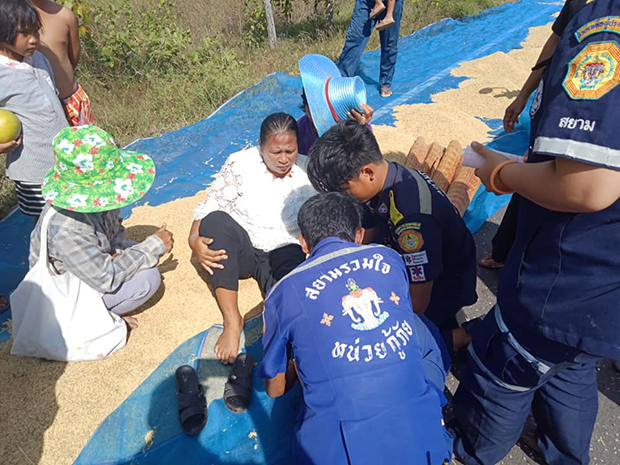 A woman was slightly injured after her motorcycle slid on a pile of paddy on a road in Nang Rong district of Buri Ram province on Nov 10, 2018. (Photo from Buri Ram Rescue Centre Facebook account)

Paddy now covers almost half the road in some areas, including the locations of accidents in Lam Plai Mat and Nang Rong.

Prasong Sabrum, a farmer at Ban Nong Muang Noi, in Lam Plai Mat, said she and her colleagues were scrambling to find empty space to dry paddy at the end of the harvest season. Roads were a good option, she said, since the road surface could help it dry within days, compared with about a week when paddy was dried in rice fields.

"Farmers knew what they were doing was against the law. They did not want to do it but they had no choice," Mrs Prasong added. 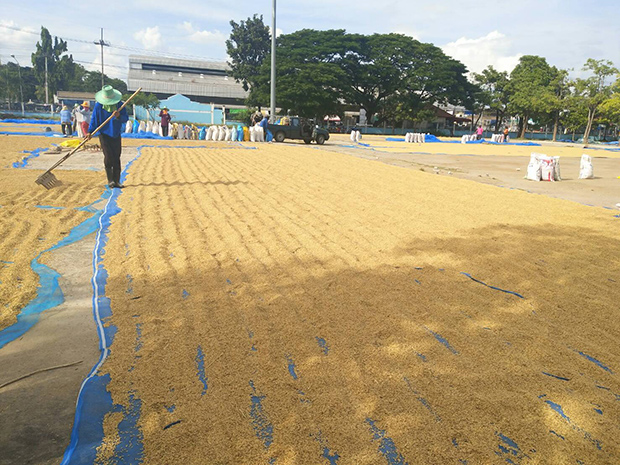 The Chum Phuang district office in Nakhon Ratchasima province allows farmers to use its premises to dry paddy. (Photo by Prasit Tangprasert)

State offices such as the Chum Phuang police station and district office help farmers by allowing them to dry paddy on their premises.

Suthep Kongmark, the Farmer Association president based in Ayutthaya province, thanked them for the decision, saying it could reduce the number of farmers using roads as drying pads.

All networks were advised to tell farmers to use only part of the roads -- such as the shoulder -- to dry paddy if necessary and they should put up a sign to alert motorists, the farmer leader said.