Alleged procurer Waraporn Ketnatthee, 20, is interrogated by senior police after her arrest outside a room at a love motel in Muang district of southern Phatthalung. A 14-year-old schoolgirl was inside the room waiting for a customer to arrive. (Photo by Assawin Pakkawan)

PHATTHALUNG: A tomboy has been arrested for allegedly procuring a schoolgirl to work in the sex trade after delivering the 14-year-old to a customer at a motel in Muang district.

The police stakeout was part of an investigation into the operations of organised gangs in the province provinding  customers with under-age girls for sex.

Waraporn Ketnatthee, 20, of Trang’s Sikao district, was detained while waiting outside a room after she took the young student to a love motel on Tuesday.

When police entered the room, the girl was sitting alone on the bed waiting for a customer, the arresting officer, Pol Col Pattharawit Kheetamothaneeyakul, investigation superintendent, said on Wednesday.

The girl and the alleged procurer were taken to Muang police station for interrogation. Because the girl is a minor, officials from the provincial human security and social development office were called in to assist with the questioning. 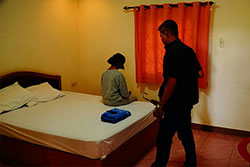 The 14-year-old girl inside a room at love motel in Phatthalung, taken during the police raid on  Tuesday.  (Photo by Assawin Pakkawan)

The young student told police she had lived with her uncle since her parents separated several years ago. She was given 20 baht a day for use at school, but it was not enough.  She was told by a friend’s mother to contact her if she needed money.

She was later convinced to provide sex services to men and was paid 3,000 baht for the first time, she said. She later received 500-1,000 baht a time. Most customers were older men and local government officials, she said.

Ms Waraporn told police she was just sent along to take care of the girl. They were not convinced.

Police were hunting down those involved.