The FDA has finally followed the lead of virtually every country in the world, and will allow OTC sale of the most popular allergy relief tablets.

The Food and Drug Administration (FDA) has delisted Loratadine, which is used to treat allergies, as a dangerous drug and reclassified it as a non-prescription antihistamine medication, meaning it can be purchased over the counter (OTC) at pharmacies nationwide.

FDA deputy secretary-general Surachoke Tangwiwat said Wednesday the agency invited all stakeholders, including pharmaceutical experts, to join a sub-panel deliberating the case before a decision was made.

He said the sub-committee decided it is safe enough for general use without the need for allergy sufferers to consult a doctor first.

Citing clinical reports, the panel found the side effects to be negligible in most cases, he said.

There was some concern about whether it could have an adverse effect on patients with kidney or liver disease, but the likelihood of this happening was less than 0.1%, he added.

"We're not the only ones making this available OTC. People have been able to buy it at drugstores in many countries for decades without a prescription," Mr Surachoke said.

He said the reclassification would spare patients long and unnecessary hospital waits.

Mr Surachoke made the remarks after a pharmacist raised concern about the decision to make the drug for easier to buy, warning people it has strong side effects and should only be prescribed by a certified medical doctor.

The pharmacist said the FDA has opened the floodgates so now everyone with a runny nose can go running to their local drugstore to snap it up, despite this not being among its use cases.

Citing statistics from the FDA's Health Product Vigilance Centre, she said there have been 501 recorded cases this year of people experiencing uncomfortable side effects from taking loratadine.

Dr Surachoke said the FDA would closely monitor its usage and any related side effects from its consumption, and issue reports every six months to ensure it is safe for public consumption.

He said the drug would be available on pharmacy shelves as soon as the public health minister signs the order to officially soften its status.

It is estimated that around 30% of Thai people have some form of allergy, causing running noses and eye and skin irritation. 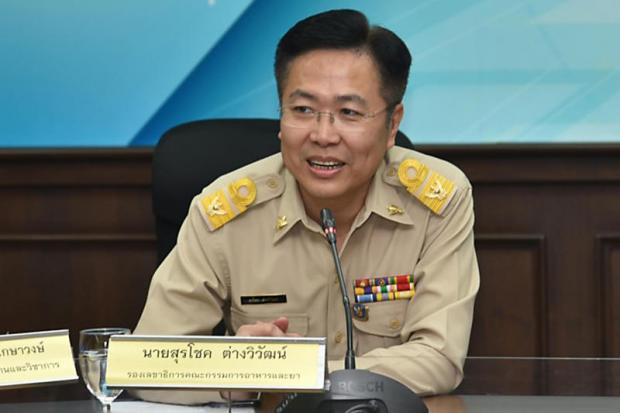 In a related issue, a pharmacist has stressed the need to restructure the FDA by spinning off the unit that approves food and drug licences in order to better prevent substandard and harmful products from entering the market.

Once it is working independently, the new organisation will be able to make stricter consideration of all requests for licence numbers for food and drugs, which appear to have been "easily granted" to applicants, said Supawadee Plengchai, who is working at Thung Khao Luang hospital in Roi Et.

When some products are easily licenced, their owners may exploit this loophole to serve their own agendas, including secretly adding some substances to their goods, she observed.

The latest inspection of cosmetic and skin care products by public health officials in Songkhla reflects some of her concerns.

Inspections carried out on 1,616 samples between October 2017 and July 2018 found there were discrepancies between licence numbers and manufacturing places in nearly 77% of cases, Ms Supawadee said.

Prohibited substances were also found in some cosmetic products.

If the restructuring proposal takes effect, the FDA will be better able to work for the health of the Thai public, she said.

The new organisation will work on pre-market controls while the FDA will focus on monitoring and regulating licenced products, as well as receiving complaints.