A visit to Asia's largest high-speed train station in Asia, in Shanghai, gives a glimpse of what lies ahead for Thailand.

Walking into a colossal, ultra-modern high-speed railway station in Shanghai can be an eye-opening experience, especially for Thais.

The high-speed technology is worth closer examination because a Chinese company is building Thailand's first high-speed railway network and station.

CRRC, a Chinese state-owned enterprise and one of the largest rolling stock manufacturers in the world, will supply the railway technology.

The first phase from Bangkok to Nakhon Ratchasima got under way in December 2017. Currently, the bidding for 13 remaining contracts is ongoing. Thailand's first high speed train is tentatively set for a start in 2023.

Under the Thai-Chinese high-speed railway contract, CRRC will supply Fuxing trains to Thailand.

The State Railway of Thailand, which is overseeing the project, said the 606km-long Bangkok to Nong Khai route will use 250kph-model Fuxing trains.

CRRC has also provided subways and high-speed trains for the US, Argentina, Brazil and Singapore.

China has been operating an extensive high-speed railway (HSR) network for eight years.

A newbie to the industry, the communist country has followed the likes of Germany, Japan, France and Italy in adopting HRS as a key mode of transportation. 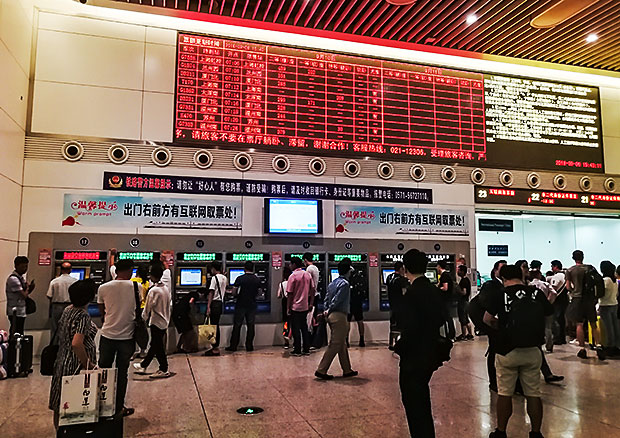 Ticket to ride: Passengers line up at ticket vending machines to buy tickets or receive prepaid tickets. A large screen displaying the status of each arriving and departing train is placed above the machines.

China's government is keen on developing its transport infrastructure to serve its 1.4 billion population.

Its achievement is awesome. Currently, China has the largest HSR network in the world, covering over 27,000km.

Chinese railway officials, talking to the Bangkok Post, admitted China's progress owes something to designs adopted in other countries, adapted for Chinese conditions.

Among the showcases of China's high-speed railway network are the Shanghai Hongqiao Railway Station, in bustling Shanghai.

At 1.3 million sq m in size, it is the largest railway station in Asia, and services an average of 260,000 passengers per day, according to the Shanghai Railway Bureau.

The station services only high-speed trains.

Shops selling luxurious, traditional combs and stalls offering live crab can also be seen inside the railway station. Passing tourists often stop by the stalls to take the odd picture.

The Shanghai Hongqiao railway station is designed with energy conservation in mind. The building is mostly naturally-lit in the daytime, with windows on all four sides of the station and a partially clear ceiling.

Its departure hall also houses business-class lounges, vending machines and bathrooms which have censors indicating which stalls are vacant. The non-occupied stalls are displayed on lavatory blueprint screens in front of the bathrooms.

Apart from conveniences, the key part of the station's functionality is its location. The station is part of the "Hongqiao Comprehensive Transportation Hub", since it was built directly next to Terminal 2 of Shanghai Hongqiao International Airport. The station is connected to three Shanghai Metro lines and bus routes. A yet-to-open magnetic levitation (Maglev) train is also accessible from the hub.

Prices for HSR trips are normally twice or three times as high as those of regular-speed trains. But the source, who works at the station, insists passenger numbers remain high, and even double during Chinese holiday seasons. 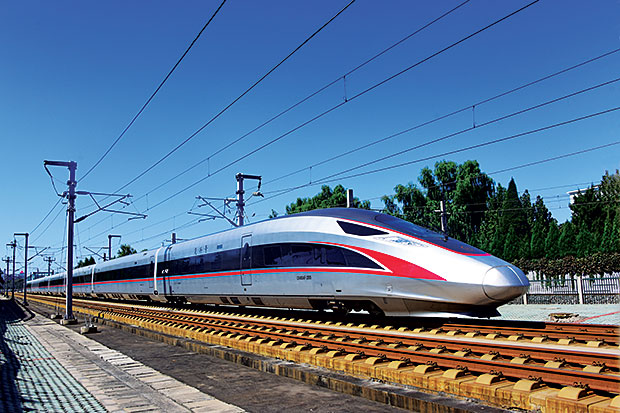 The cheapest seats for regular-speed trains from Nanchang to Shanghai cost around 100 yuan, or 475 baht, while the most expensive sleeper seats would set a passenger back by about 320 yuan, or around 1,500 baht.

Compared to ticket fares for the SRT's Bangkok-Chiang Mai long-distance trains, Thailand's prices are a bit higher. A journey from the Thai capital to Chiang Mai would cost 641 baht for a hard seat and 1,653 baht for a sleeper seat. Premium tickets can cost up to 2,453 baht for a private sleeper room. The trip takes around 11 hours to complete.

High-speed trains in China are mostly split into three classes: second, first class, and business class, which is the most premium service offered.

The cheapest tickets for the Nanchang-Shanghai high-speed train cost as much as the most expensive seats on the regular-speed trains. Business class tickets -- considered first class -- can cost around 1,000 yuan, or almost 5,000 baht per ticket.

The high-speed-train proves to be a popular way of commuting.

The Shanghai Railway Bureau source said many Chinese nationals who work in Shanghai cannot afford to rent or to buy their own homes in the city due to soaring real estate prices. This has led to cases where people have chosen to live in towns nearby such as Hangzhou and make a daily commute to Shanghai by HSR.

Hangzhou is around 160km away from Shanghai Hongqiao railway station, and a high-speed train trip takes around an hour to complete on average.

CRRC is becoming a world leading competitive rolling stock manufacturer. A recent innovation is the latest Fuxing-brand high-speed train, the second-fastest-running commercial train in the world, reaching speeds of up to 350kph.

The fastest commercially-available train in the world, also from China, is the Shanghai maglev train operating at Shanghai Pudong International Airport. 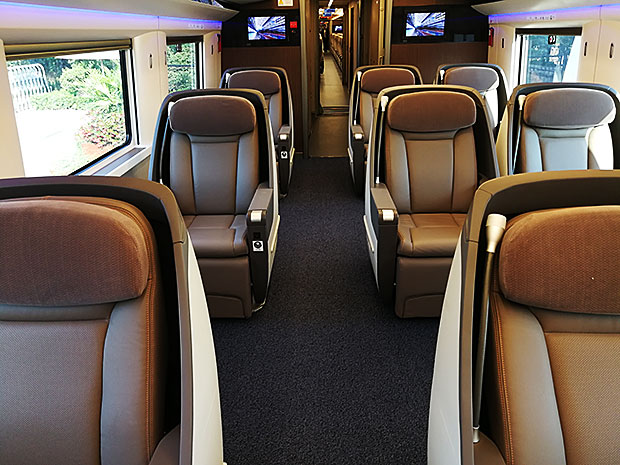 Swift and smart: Business class seats on the Fuxing high-speed train, the most premium-level seats available on the trains. Business class lounges are also available at train stations, with entrance fees collected separately to tickets.

For the Chinese government, Fuxing, translated as "rejuvenation", is proud, living proof that China is a technologically advanced nation.

The first of the Fuxing trains was launched in August 2016, initially reaching speeds of up to 250kph, according to the CRRC.

A CRRC source told the Bangkok Post the first trains were modelled on Japanese Shinkansen trains, based on research using its blueprints in 2003.

At present, the 350kph Fuxing trains come in variants of eight-car and 16-car trains, servicing 556 and 1,193 passengers per trip, respectively. The train is assembled in a CRRC factory in Qingdao, a city on the east coast province of Shandong.

As Thailand waits for its first ever HSR network, it will also have to take into consideration the risk that comes with operating such a system.

Aside from the fact the network might not be a lucrative investment, high-speed train crashes and other incidents can be disastrous, as past events have proved.

In July 2011, two high-speed trains travelling in the same direction in Wenzhou, in Zhejiang province, China, collided with each other.

Parts of the trains were derailed and fell to the ground below, with the crash ultimately resulting in 40 deaths and over 190 injuries, according to reports. Three senior railway officials were dismissed following the incident.

The Chinese government, which tried to suppress domestic news coverage of the incident, was criticised by the media for sacrificing safety in the interests of speedy development.

The incident was considered the third worst HSR-related crash in history.

The second, dubbed "the Santiago de Compostela derailment", happened in July 2013, when a high-speed train travelling from Madrid to Ferrol in northwestern Spain derailed after the train was going almost twice as fast as the recommended 80kph-speed on a bend in the railway. In the accident, 79 people died with another 140 injured.

The worst incident occurred in Germany, in June 1998. A high-speed train travelling in Eschede in Lower Saxony derailed and crashed into a bridge, resulting in 101 people killed and a further 100 injured. Authorities from the scene said the cause was a crack in one of the train's wheels.